Does the SK have a wobble or lock or is it regular?

I have always either cobbled together some extensions, pulled the bulkhead (because I was tearing down the truck) or I am told you can plenum when doing a trans removal and get at the top bolts that way, but I have had the Sunex 36in in my cart for a while.

I just can’t make up my mind which is the best. If it’s the SK, I will get that, but I would also sort of like to know if there is anything special about it v the others as I have a theme with Sunex (and like the warranty because I break stuff).
A

It is not a wobble or lock - that's it's one downfall, I wish it had a lock. I use it with shallow Matco 3/8 wobble impact sockets to great success.

evilfij said:
Ya. What VW? I would have given you a set of 16in alloys I have.
Click to expand...

What is everyone’s favorite screwdriver?

I just got the

It has a hex bolster and the lazer tip. It’s stupid expensive ($15) compared to either the chiseldrivers set or the normal green set and you can’t get them in a set, but I figured for the most used screwdriver it was worth a shot. I waffle between the Wera and the Felo as my favorite, although recently I bought a lot of Witte (matco sells rebranded witte and there no pozis that I have found unfortunately except for the Stahlwille ones witte makes which I am not super fond of the handle on at least the 3K ones I have).

SK SAE swivel sockets showed up (finally), but the real reason is that SK has announced its sale to Hangzhou Greatstar. 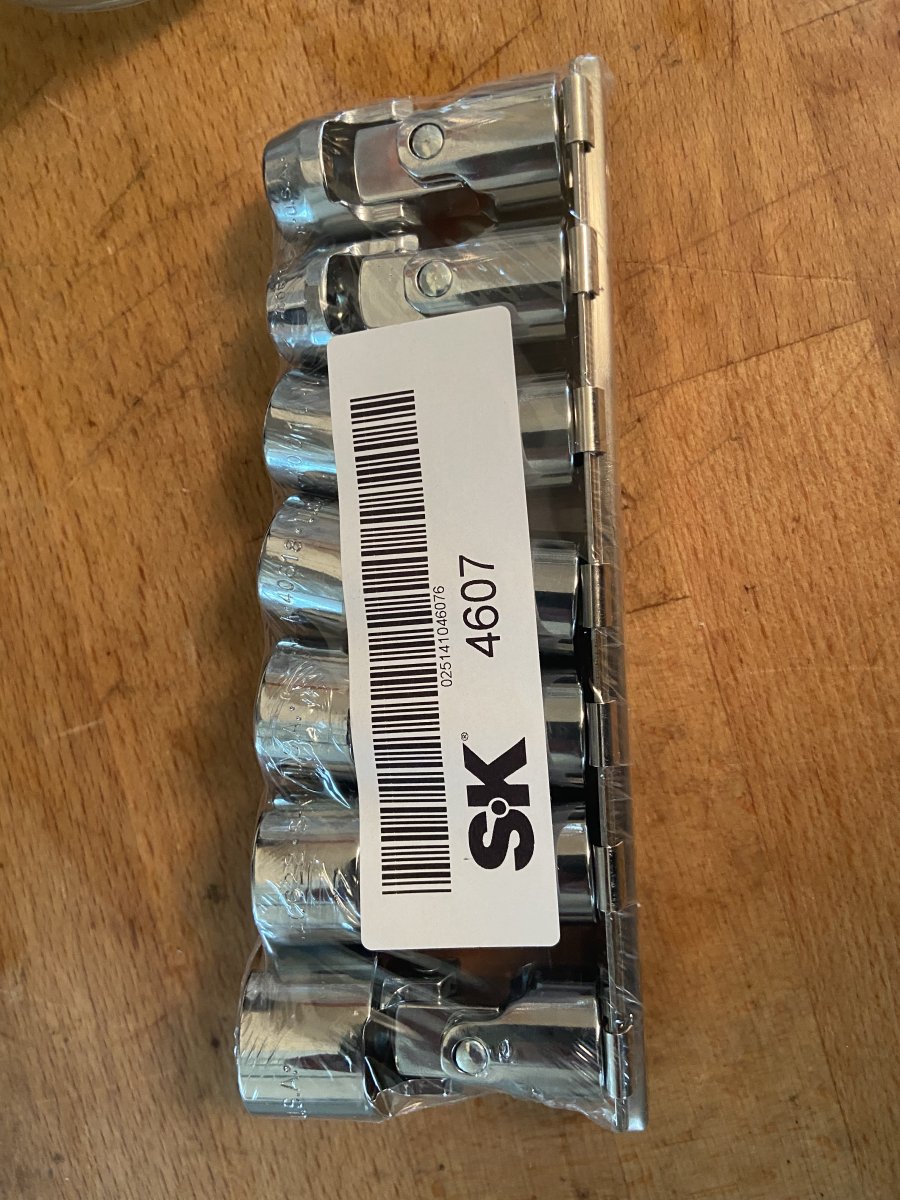 evilfij said:
SK has announced its sale to Hangzhou Greatstar.
Click to expand...

Next they will "shift" production to China to provide "better value" for their customers. Then they go in the same pile as Craftsman when they began manufacturing tools in China. I'm running out of American manufactured tool companies...have to shift to German tools like Ron.

If SK offshores, USA made hand mechanics tools is down to snap-on and Wright pretty much. Lots of MATCO is imported and Mac is almost all imported thanks to Stanley Black and Decker. There are a few other small manufacturers too. I think a lot of SK people will turn to Wright if that happens. I do have a lot of USA made tools, but it’s like Malco, channellock, Klein, old craftsman, old kobalt etc. I have my eye on some wright stuff, probably give them a shot.

A couple 1/4 in sets with both SAE and Metric.

The Stahlwille is 200 euro on promo (plus 5-10% discount for buying over X euro) from misterworker. The Felo was like $67 on tool of the day at KC Tool. Felo went with the other Felo at the castle 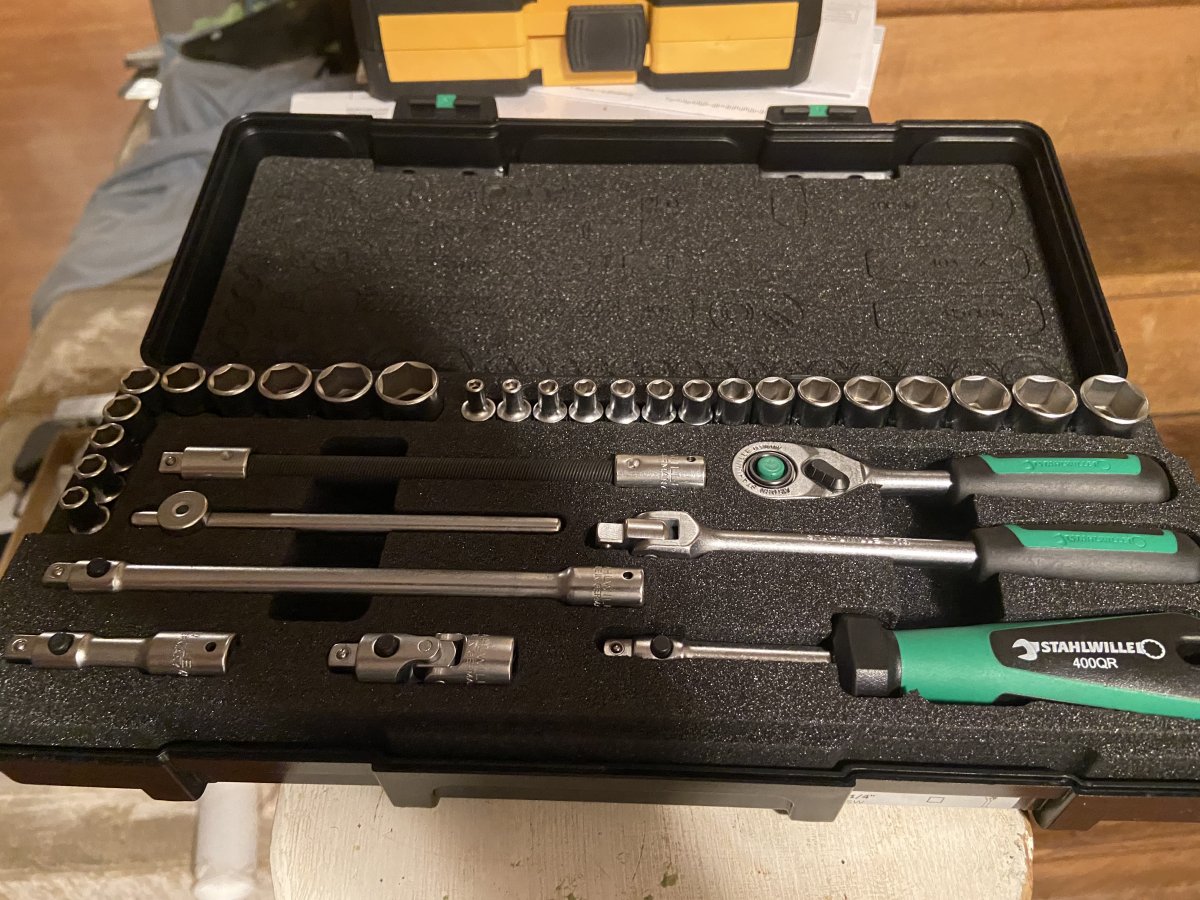 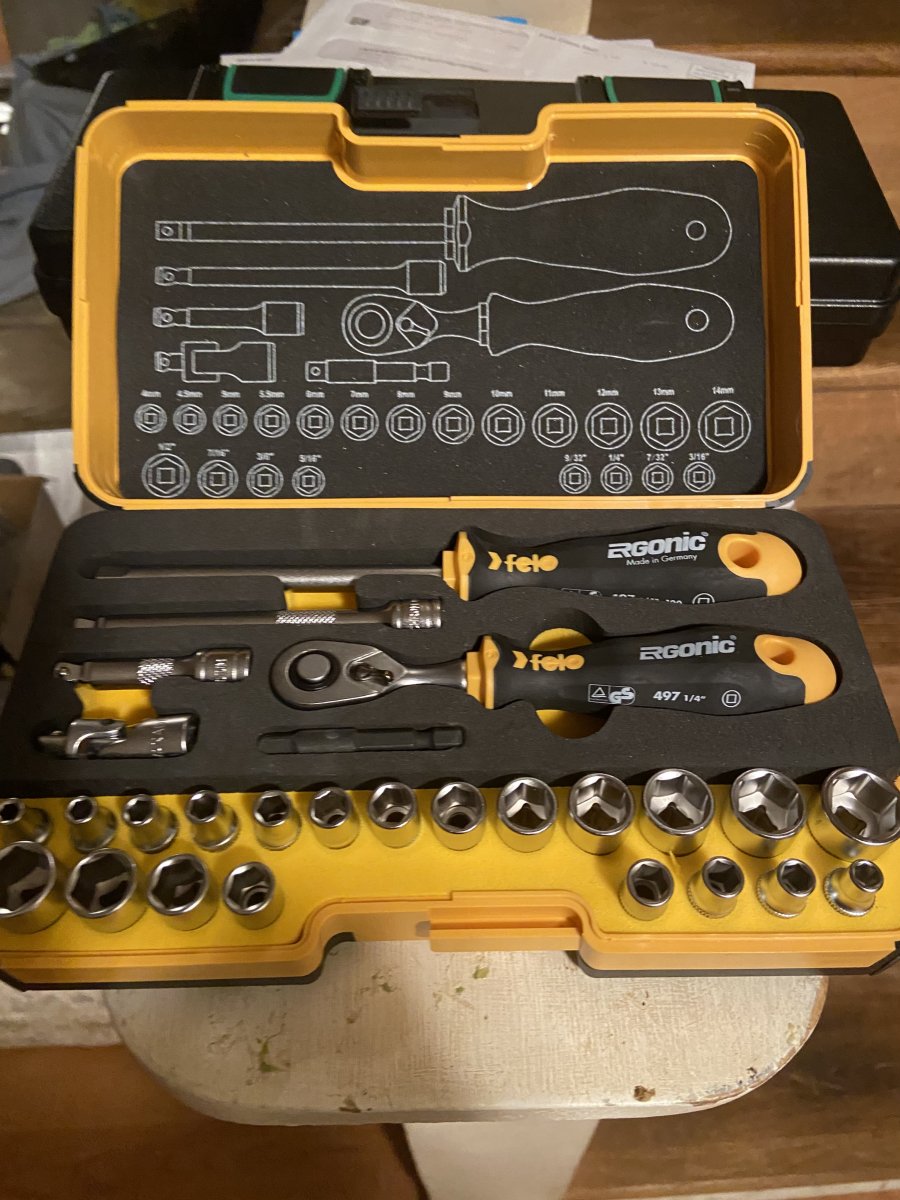 jymmiejamz said:
I should have taken a before pic… These were a couple of nasty rocker shafts after two 30 min cycles with just water and some cascade

I used to have one we used specifically for carburetors. Dish soap works really well and definitely gets off the oil. But I hated dealing with the cleanup sometimes The dish detergent would leave a white residue on aluminum parts. If I was lazy and didn't rinse.

I ended up using just a cap full of simple green until I sold it.

Napalm00 said:
I used to have one we used specifically for carburetors. Dish soap works really well and definitely gets off the oil. But I hated dealing with the cleanup sometimes The dish detergent would leave a white residue on aluminum parts. If I was lazy and didn't rinse.

I ended up using just a cap full of simple green until I sold it.
Click to expand...

I have heard simple green works well. I just happened to have cascade powder from cleaning oil out of a cooling system.

It has a hex bolster and the lazer tip. It’s stupid expensive ($15) compared to either the chiseldrivers set or the normal green set and you can’t get them in a set, but I figured for the most used screwdriver it was worth a shot.
Click to expand...

Got mine in this set: https://www.amazon.com/gp/product/B007BZ2AQY

erover82 said:
Got mine in this set: https://www.amazon.com/gp/product/B007BZ2AQY
Click to expand...

So I have that set too, and the one I posted is actually different. It has a different shaft (hex) and a hex bolster (like the chiseldrivers) but it has the lazer tip and no striking cap.

I will do a comparison. Don’t get me wrong, the regular green ones are great screwdrivers, as are the chiseldrivers, but the one I posted I think is the best.

Here is a pic of the pz3 version of the very fancy Wera with the hex and lazer tip along with a set of twin grips. These are very expensive, and I have not used this one, but the PZ2 is my new go to. So far no wear on it.

I tried to use (abuse) the twin grips and they are a beast. Not sure they are worth $35 or $40, but one stuck stripped screw is worth that to me. They also function very well as just slip joint pliers and don’t have the wobble of every other set of slip joint pliers I have used. And the teeth are very hard and sharp. I have two more sets coming …. 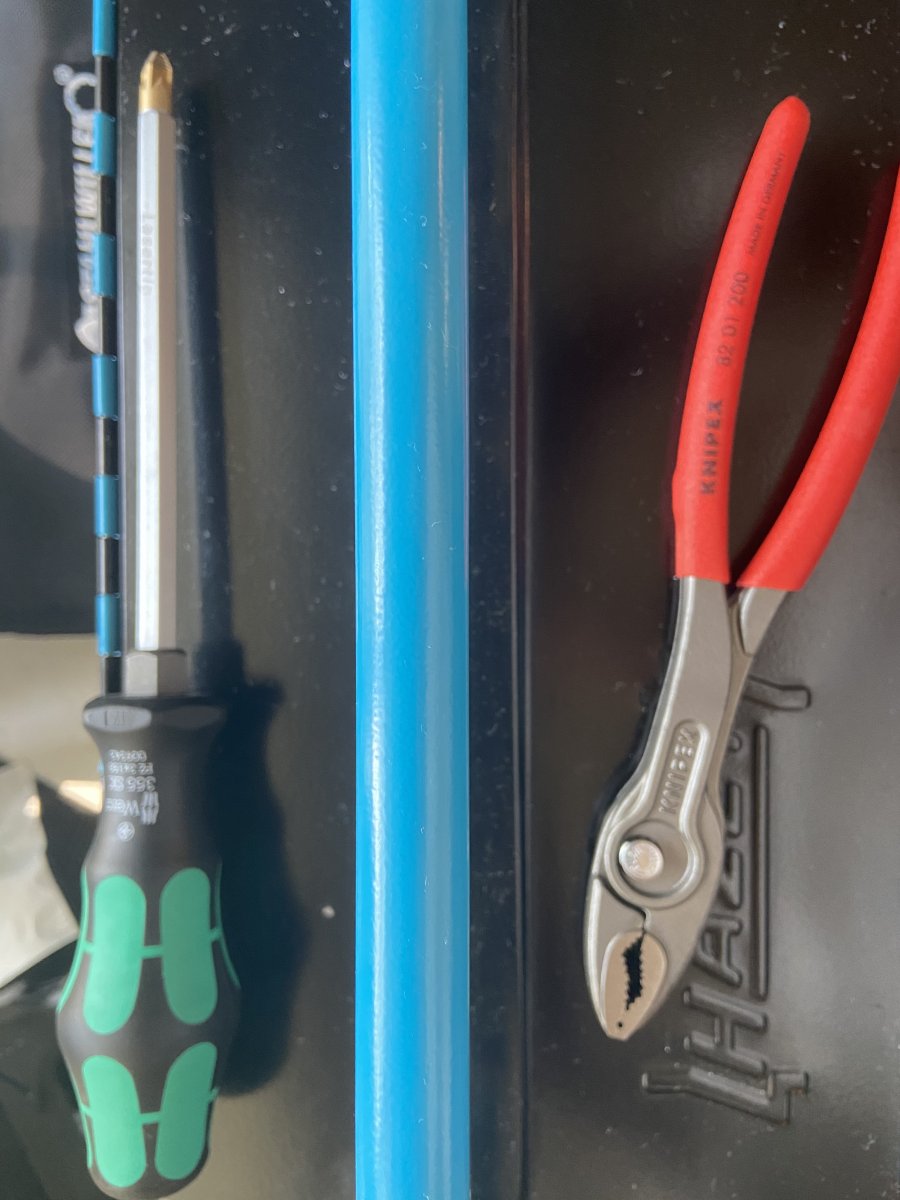 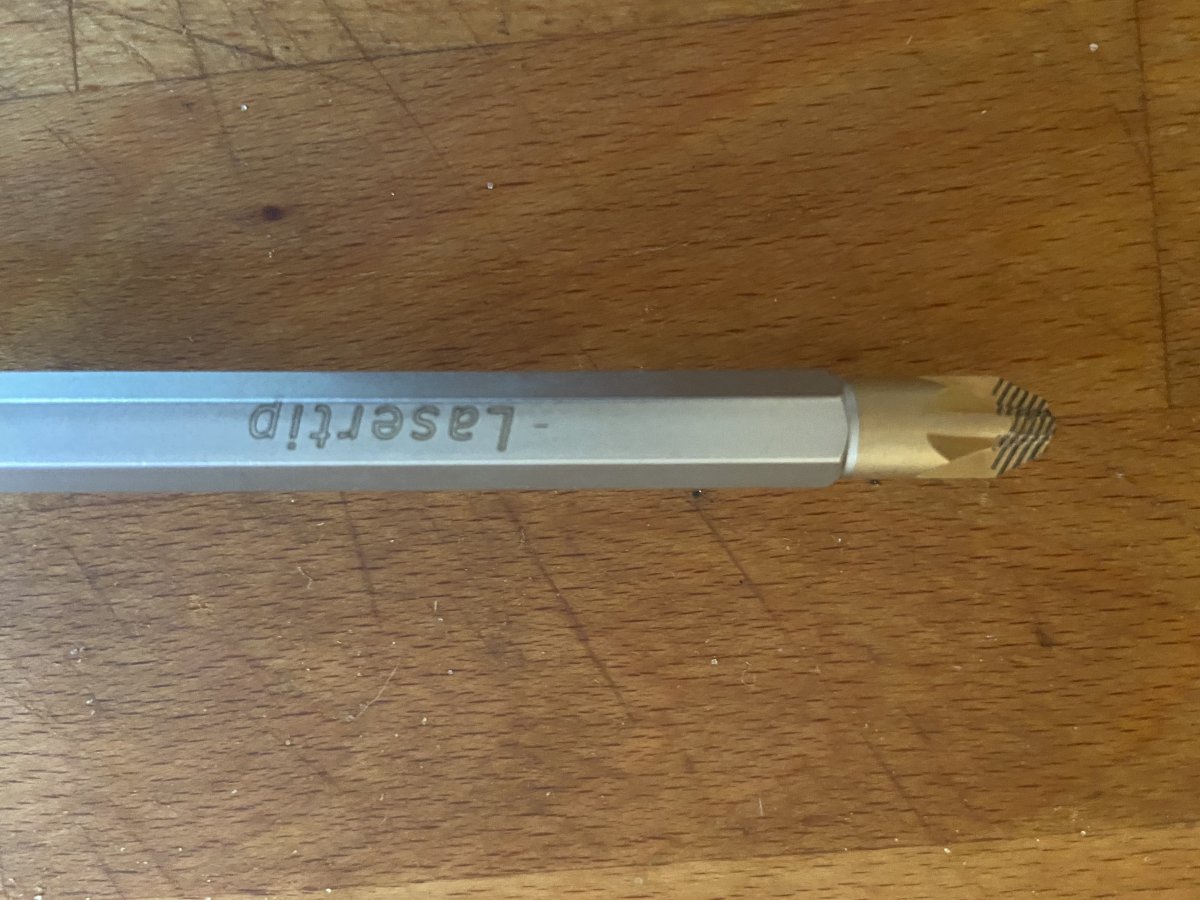 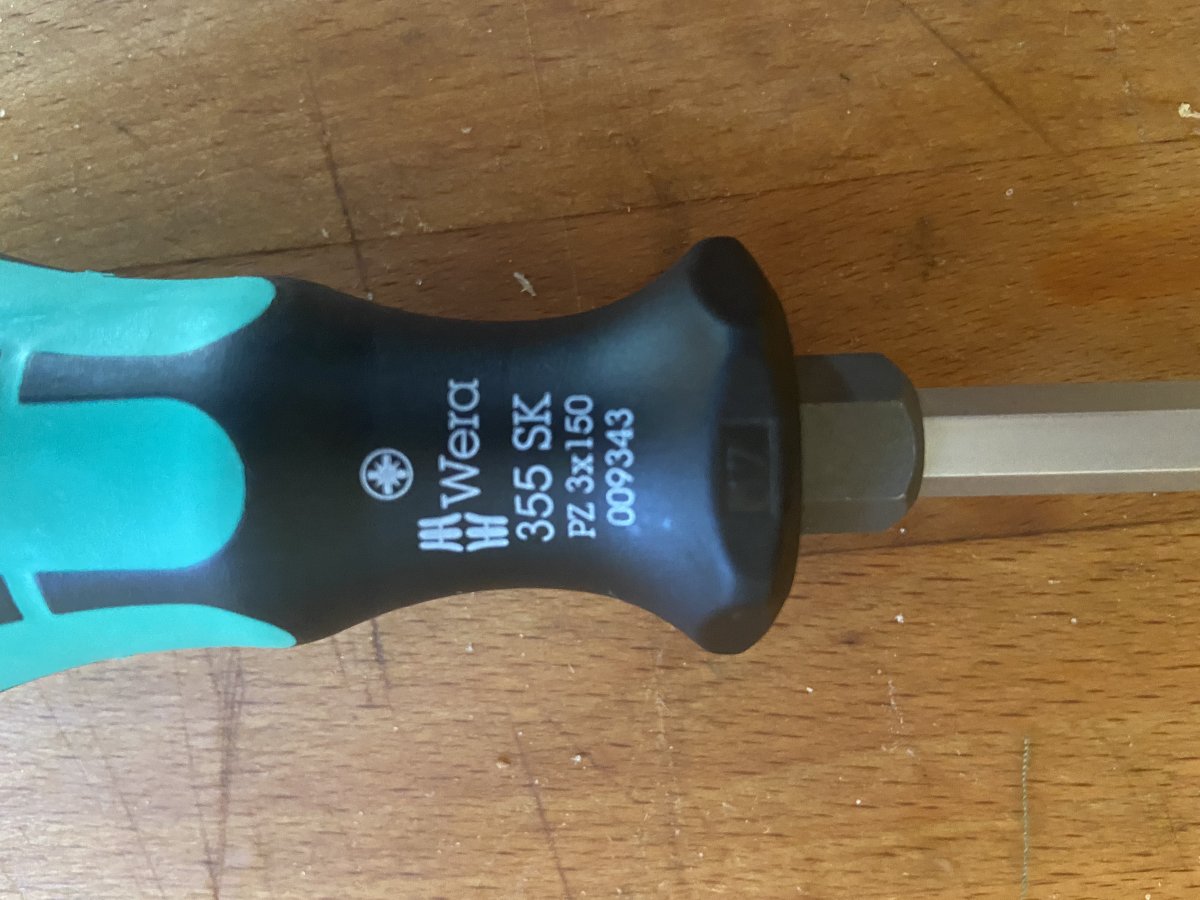 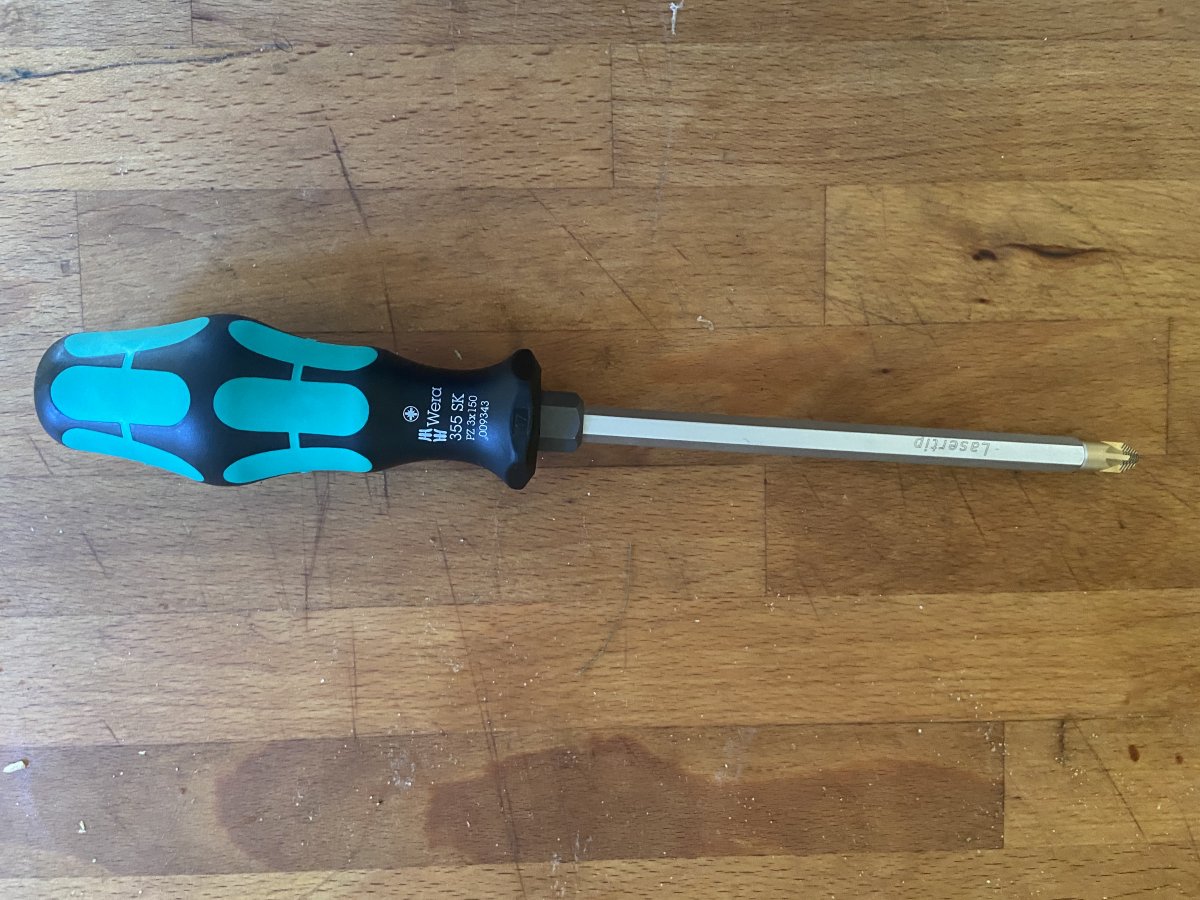 The twin grips are once again showing their value. Took two seconds to get this rusted hunk of stripped crap screw out (after spending forever trying every screwdriver and pliers I had over the past years). 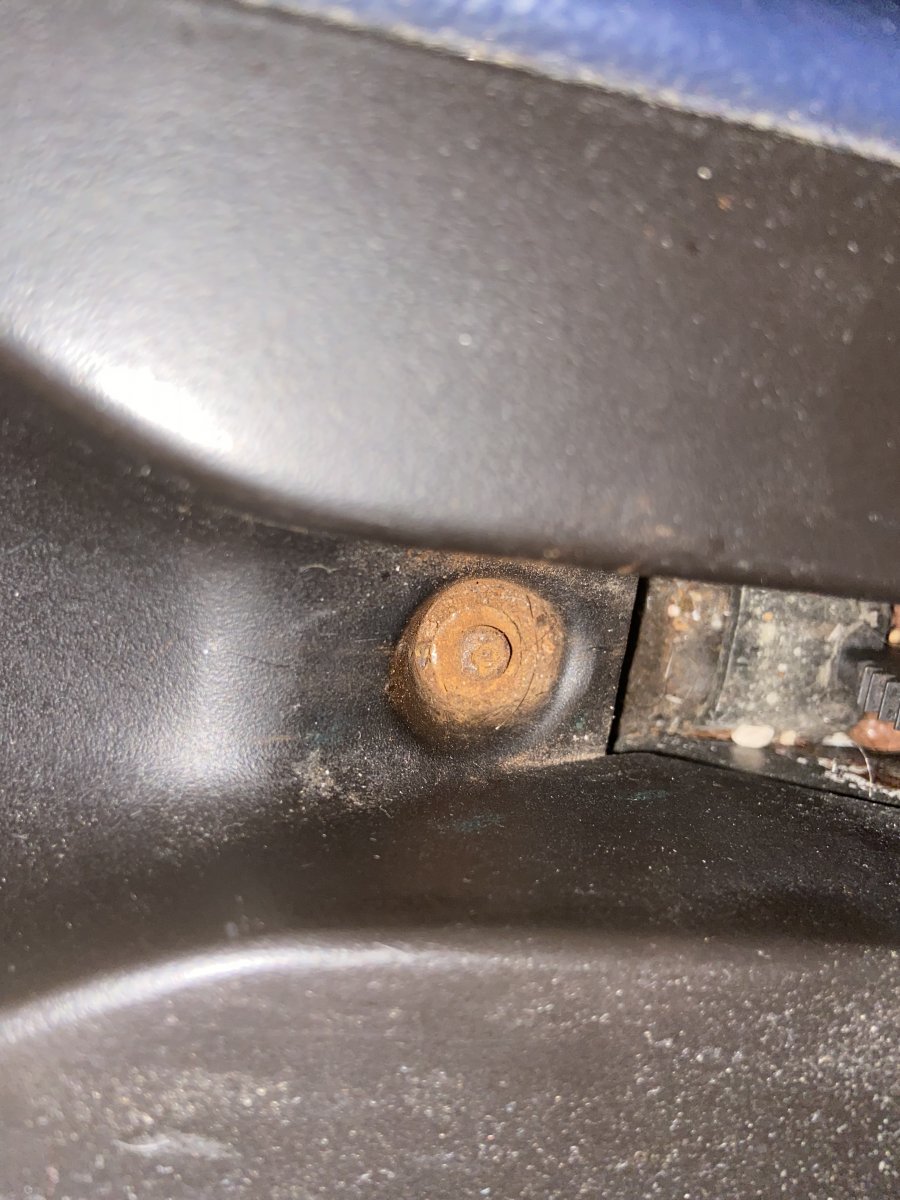 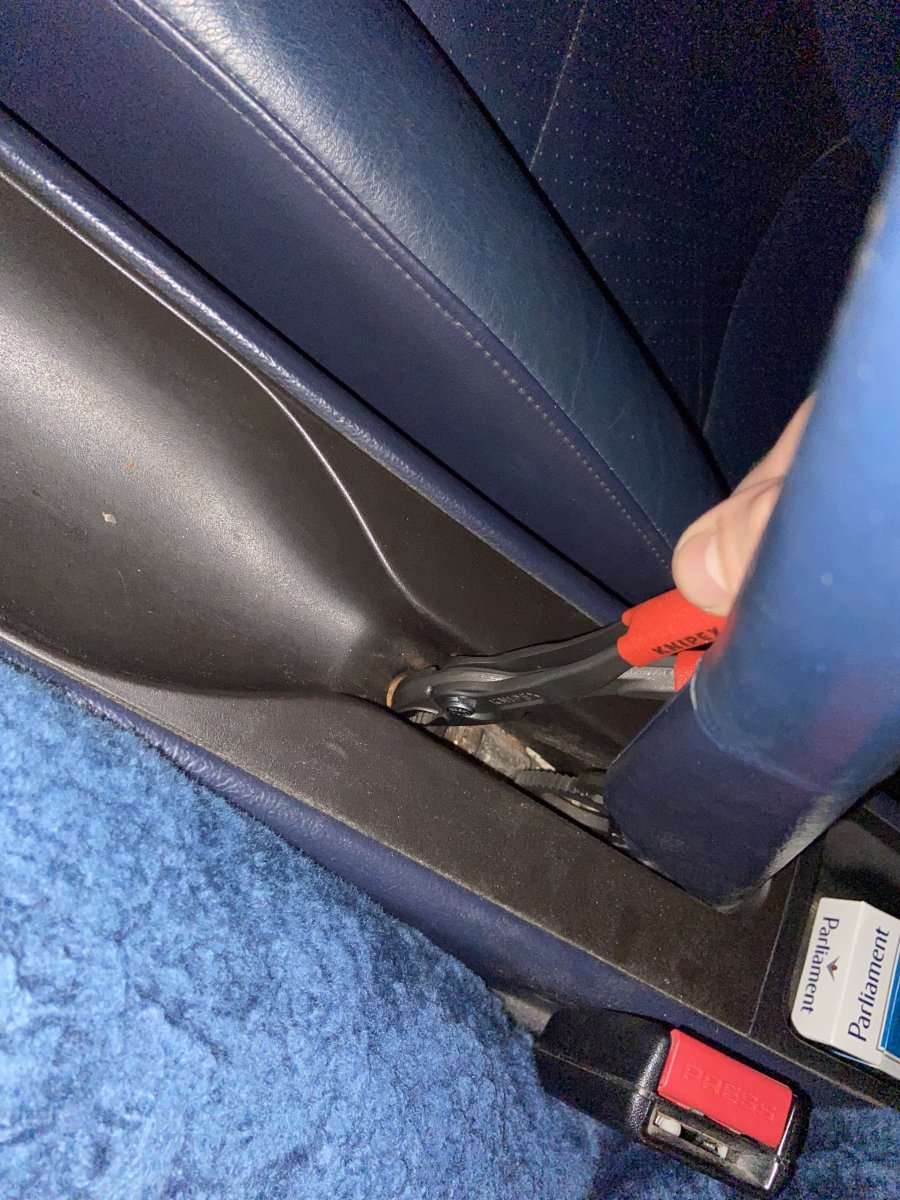 Let’s have your recommendations!

Now that we're requesting recommendations - The Knipex twin grip pliers that I ordered at Summit Racing were refunded, as they are not available at this time. Where do I find these?!?

Re: flex heads DO NOT BUY THE 1/4in Stahlwille. I have two that were broken out of the bag after waiting since February (arrived a few weeks ago). The flex button pops out because the pin is too short. I need to make new pins, but I am lazy. 3/8 Stahlwille has been great. Use it all the time. Have not tried the 1/2in. Seems great, just arrived is the only reason I have not used it.

Long 1/2 flex head (for lug nuts and such): Gedore is the nicest I have. 60 tooth, locks in the center (won’t ratchet either way) for extra strength.
3/8: stahlwille is very nice. The Gedore 3/8 the head is too big (it’s the same as the 1/2 so if you want a small 1/2 flex head the Gedore is nice). Wera the head is big too and it is ball type. I have a capri too, it’s ok, but not quick release.

1/4: I have Proxxon and a gearwrench both seem fine, but I really like the Wera zyklops which is a ball end. Downside is that it is a bit bigger so it won’t work everywhere, but it is the one I grab. Gearwrench is very slim so if you want something to get anywhere, that should work well. I don’t like that gearwrench are not quick release.

I have been waiting for Hazet to release their flex heads with the 90 tooth, preferably quick release. All they have now is low tooth count. The Hazet 90 tooth should be the best and most durable. Doubt that they make a 1/4in one though. They will be expensive. If it’s an everyday use thing, I think they would be worth it.

Chads might have twingrip (they did for a while). Just checked and they seem to have the two component SBA (bubble package) for $40. KC is backorder. Amazon cancelled my and frank’s orders. Sometimes someone has one in stock on Amazon, but it’s $50 usually. I got two pair, but I want a third for the kitchen drawer.

So I reread and you said flex head wrench sets. I actually don’t have any of those. Sorry for the misread.

@rocky , I got the gearwrench stubbies on one of the sales. They are quite handy, and quality is the usual Apex/Gearwrench. They are not reversible via switch, only flip around. I know they have full size too, these fit a gap in my toolbox and I use them more than i thought. 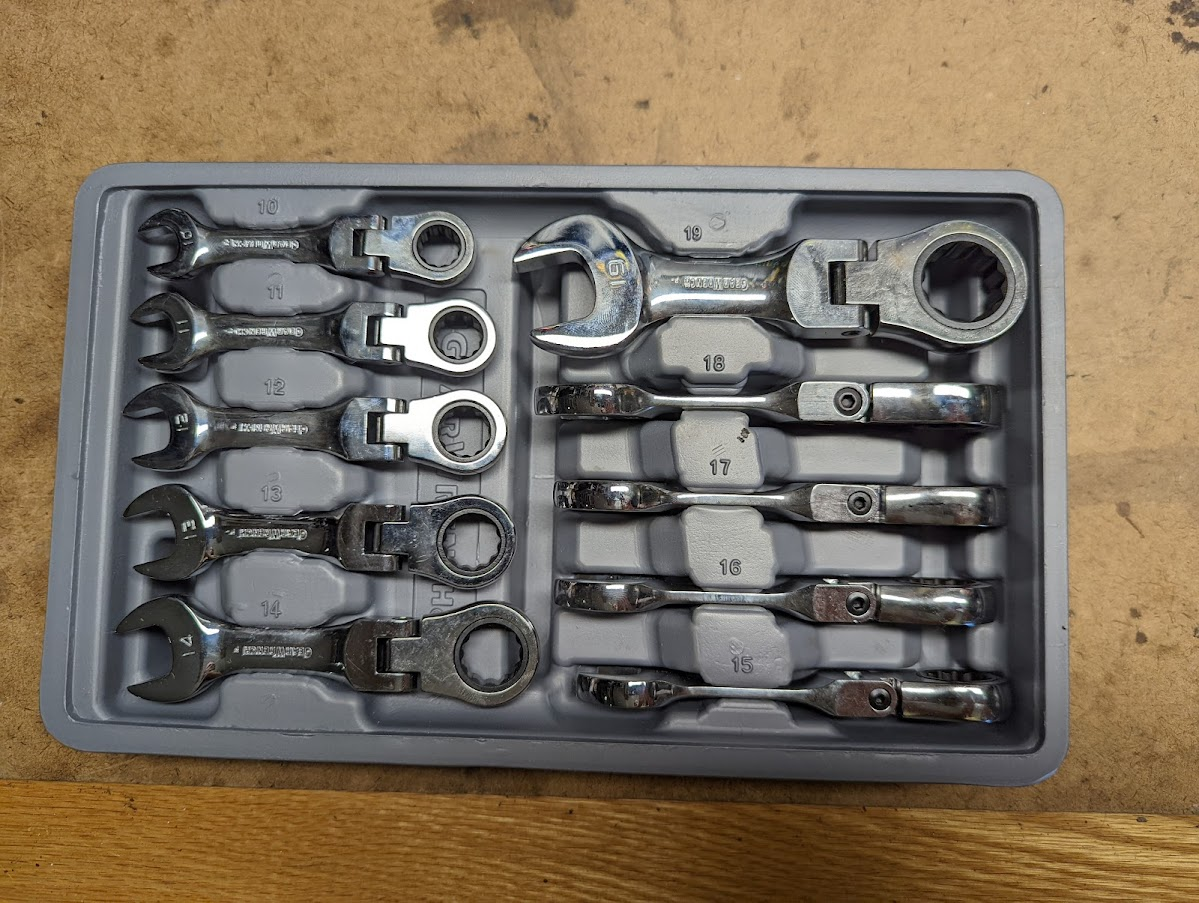 Any thoughts or experience with Hollow Ground Screwdrivers? Been looking at Chapman, Brownells, Forster, Weaver, Grace, and Lyman brands to rebuild carbs and other more intricate work than the usual demands of a Defender.
You must log in or register to reply here.
Share:
Share Link
Top