In LRM 180 (July 2013), they cover an ABS/Traction control retrofit (as well as an ODB2 Diag port) to a ROW 300Tdi Defender. Has anyone seen or done this conversion? Based on reviews of the Disco 2 traction control, it seems this could be quite advantageous on & off-road.

I'm working on time to scan the pages & happy to share/post when done.

I have the traction control on my Td5, it's brilliant, especially the anti-stall feature. No clue how it could be retrofitted to a non ABS / ECU controlled vehicle. I would think that's a complete new braking system, wheel speed sensors, shit ton of wiring. Curious to see how they did it, please post it if you could.

I would guess it's a very rudimentary set up. I know that the first of the traction control on the TD5's was considered to be somewhat basic, and as the years progressed towards the Puma trucks it became more sophisticated and capable. Some of the stuff I was able to drive at the Sollihul LR Experience in a 2015 Puma was amazing, all based on using the traction control system.
A

What I have currently appears to be "Part 2" of a series of articles. I've reached out to the shop mentioned in the article (https://irbdevelopments.com/) for additional details.

"Most wires run to and from ABS components"

The ABS is by Wabco - a wiring pinout for the ECU is here https://blackbox-solutions.com/help/SM033.html

My main concern is the TPS, I'm quite curious to see how they solved that issue.

Some of these parts may cross over with the Discovery 2 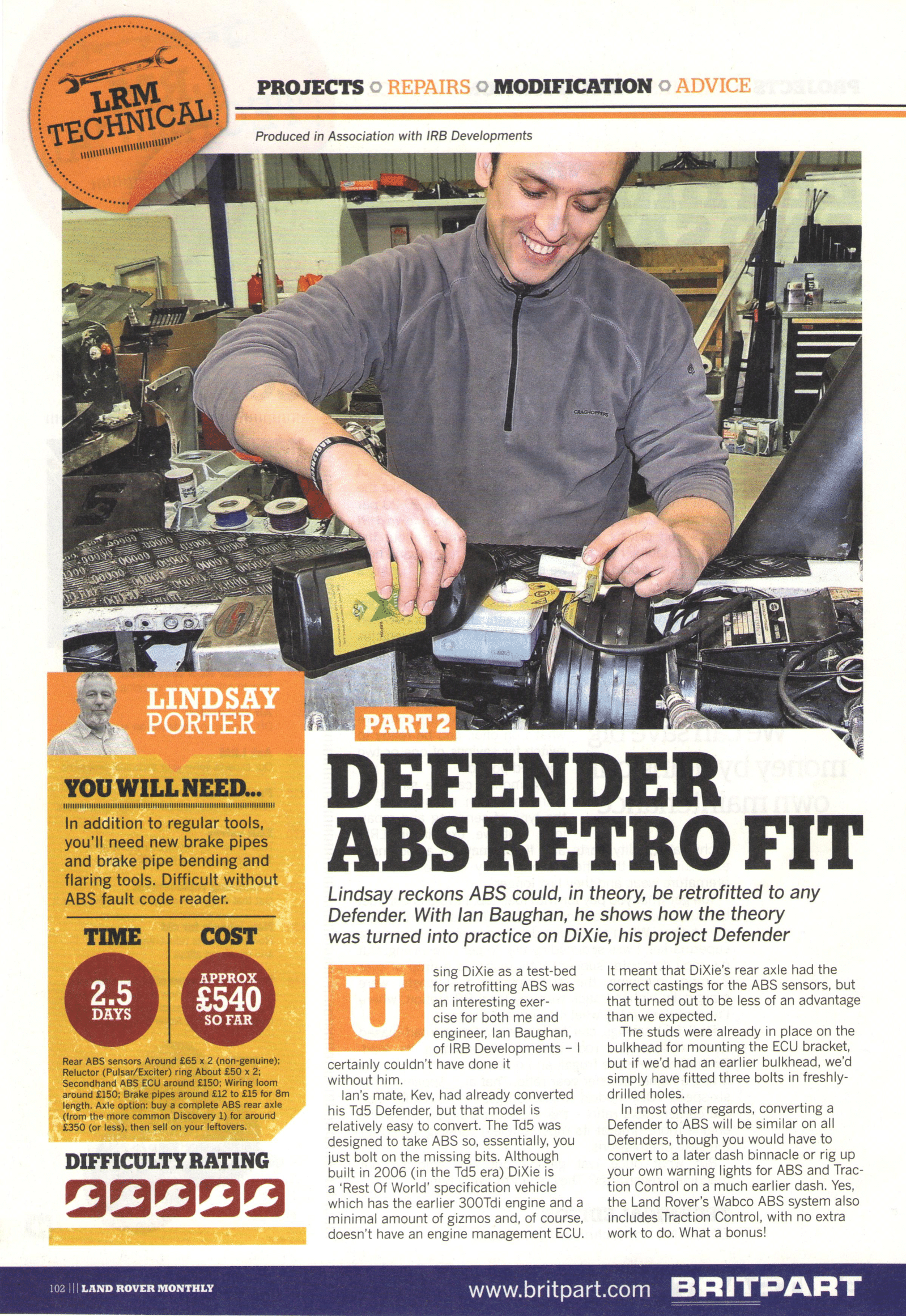 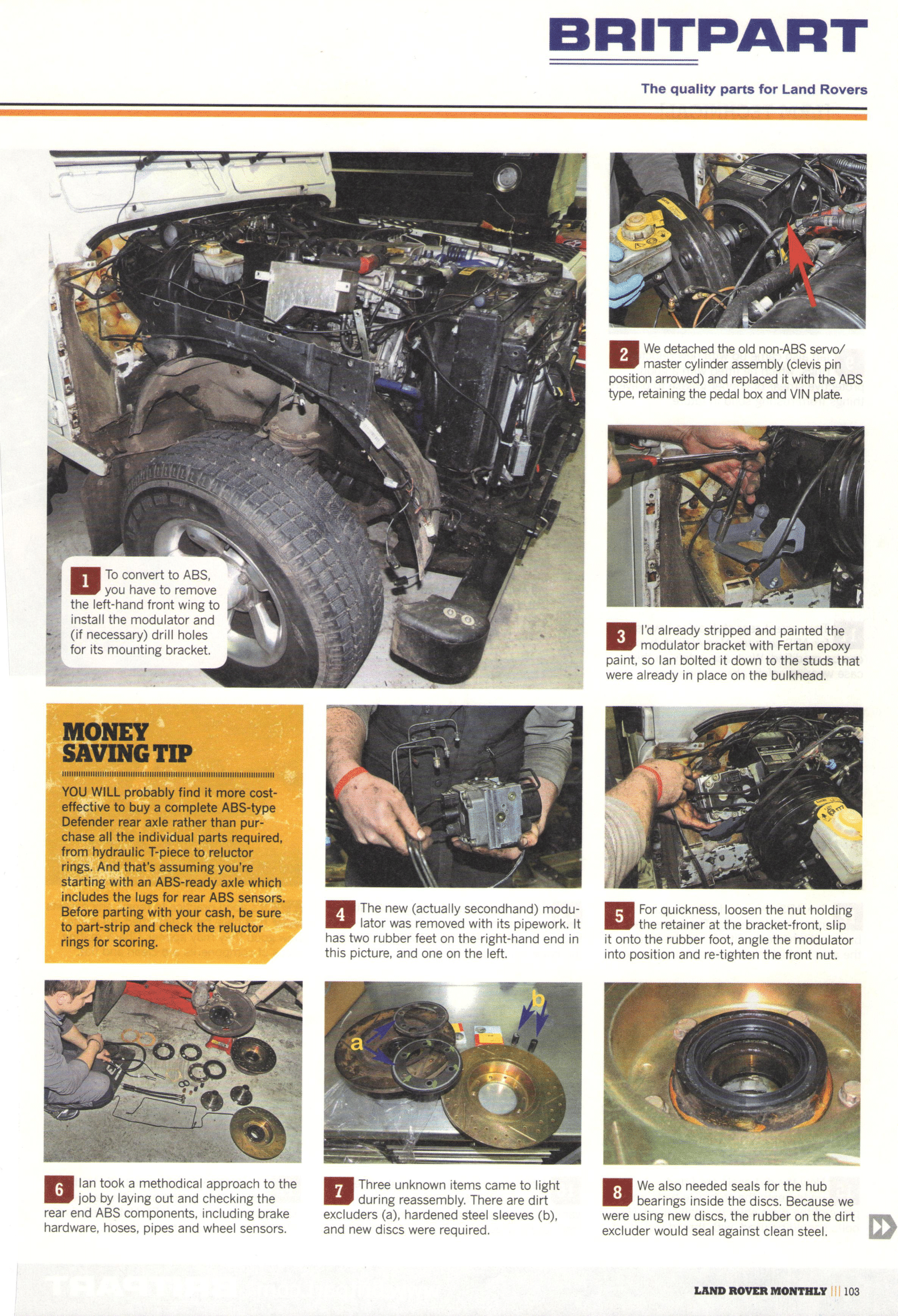 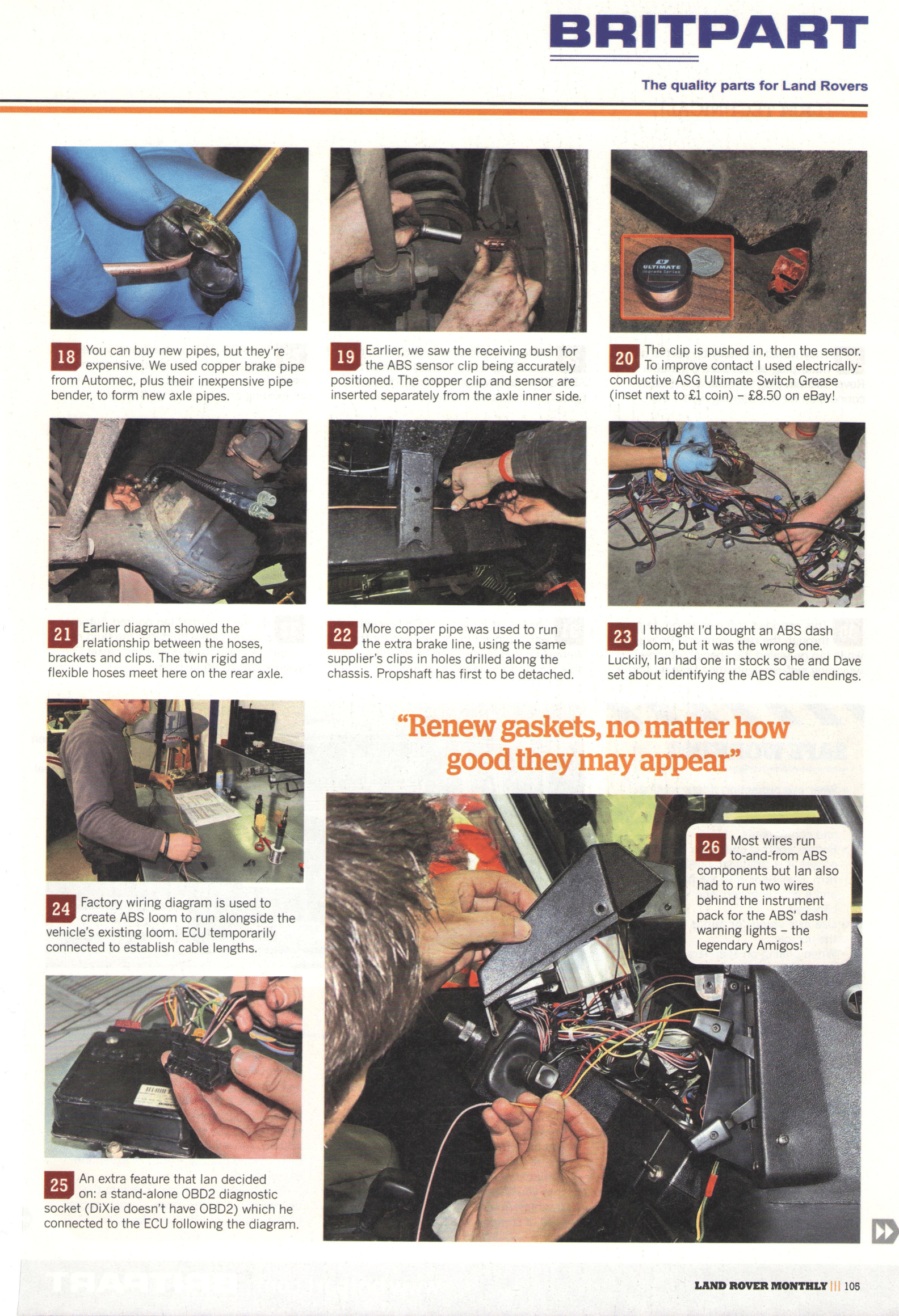 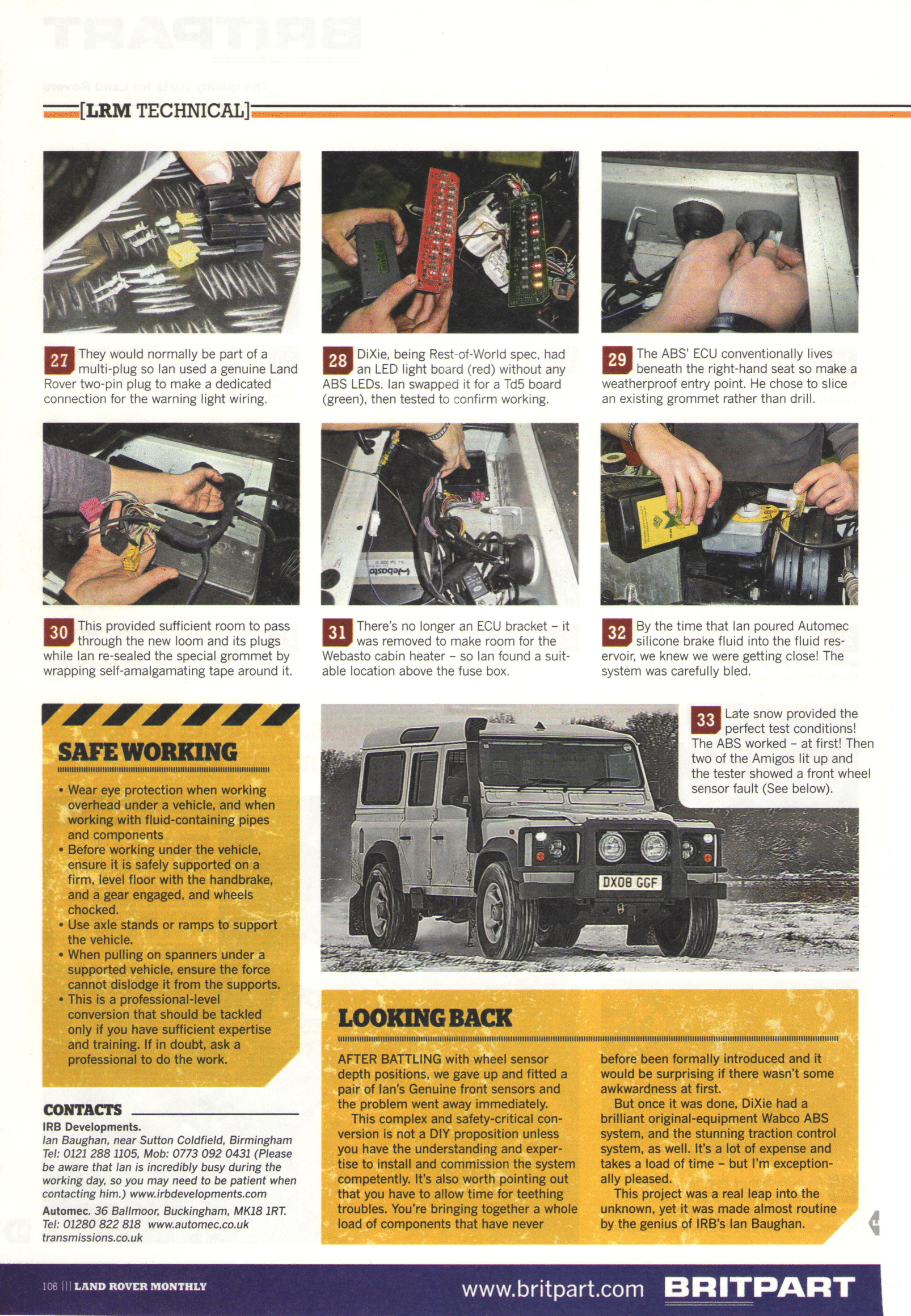 If anyone would be able to figure it out, it would be Ian. He was with JLR for close to 20 years. It's a lot of work to put the system in... and with the cost of parts on this side of the pond, I think it would be pretty pricey. BUT... it's great to have!
A

If anyone knows what issue part 1 is in, please let me know. These back issues seem to pop up every now and again
S

Great 3 amigos to fix on the 110 as well as the disco!
Briefly considered trying to do this using a complete d2 set up including axles (with BCU functions disabled) under my early 110 (as traction control is so good in mud) but decided I would keep the disco intact and the 110 right hand drive, simple and free of electronic gizmos and extra wiring (easier than trying to keep it all dry!).
That said my spare 4.0 bosch V8 is going in mated to the original LT95/overdrive transmission so still have some electronics to deal with.

ABS in my D1 wasn't reliable enough for me to port the parts to my D90. Heck it died years before the D1 did.

I have a Td5 with TC and ABS. Its great. I have only got the amigos when something is actually wrong, like a sensor dies...
S

We have 2 D2's, modified both ABS modulators to fit external connectors which eliminated most of the issues (and replaced switches and seals whist it was apart).
One of these we have had from new and it spent a large amount of time in the dealers for warranty repair to the ABS system which was only fixed when the warranty ran out and we eliminated the on board connector .
Still have intermittent issues with sensor connectors which tend to age and crack (rather than the sensors which I have never managed to break). Debating on fitting sensors with extra long leads and wiring them direct.
Have similar ongoing issues with aging connectors to the O2 sensors.

Callsign: KN4JHI
I thought you aren't supposed to use silicone brake fluid with ABS
B

Did anyone ever find part 1?
Also any thoughts on trying this on a 130? What was the reason for no ABS/TC option on 130s until the last year of production?

If nobody has found Part 1, I can email Ian and ask if he has it. I'll give it a day or two before I bug him for it on the off chance someone posts it.
A

I got no reply, would love to see more info if you can get it
C

wow, what a project. in magazines such as european car and road and track there have been attempts at such conversions, road and track begun a series of articles some 20 yrs ago where if I recall the conversion was over before it was planned. they attempted to procure all components new and at certain cost they decided it was too expensive for a Do It Yourself home garage project. it was ditched.
european magazine performed an audi tt platform transfer of parts onto a new beettle. the audi had been totalled and the beetle was worn out. they basically transfered all audi parts and electronics onto the beettle, thus gaining traction control and awd as abs was already existant from factory on the vw.
at end of project they had created a porsche eater vw beettle with traction control and abs at a cost of nearly $40,000 euros. again not a feasible project for a home mechanic.
the land rover does seem promising and over all possible. the module shown is similar to that of the p38.

good luck to all whom attempt it. looks promising.
A

I think its doable - I'd love to have both the ABS & traction control, not sure how it would interact w/14cux
C

Adam said:
I think its doable - I'd love to have both the ABS & traction control, not sure how it would interact w/14cux
Click to expand...

well, nas 92 to 95 Classics were 14 cux and had all axle ABS and rear axle only Traction Control, nas 94 to 95 D1 was 14 cux and had ABS not sure it it had TC, TC is controlled by ABS ECU not engine. they do communicate with each other though. so in response to your question yes abs retrofit would be doable in 14cux units.
B

Hi All, anyone find part 1

Really interested in doing this on my 2006MY (TD5) 130 - I have a complete dash loom etc so in theory its "just" a parts swap, just concerned why ABS/TC was never offered on the 130 (well until the last model year TDCi) whether theres something in the ECU software that doesnt account properly for the wheelbase or???

I've started rounding up parts to do my own ABS with TC conversion. It appears it's not a problem to retrofit the Td5 and early Puma Wabco ABS to a Defender with Td5, V8 GEMS, or BMW M52 MS41. According to the 2002 Td5 Electrical Library the ABS ECU has two connections to the engine ECU. One for throttle position which is a 5 volt PWM signal, and engine speed which is two pulses per revolution. It appears both are one way communication from the engine ECU to the ABS ECU only. So as long as your ECU outputs those two signals you are golden.

The Bosch DSC system found on the late Pumas would most likely be more reliable, but it requires CAN bus communication to the engine ECU. So it would need a TDCi engine ECU or something else compatible. The Bosch system is found on lots of cars, so maybe Defenders with an LS conversion could utilize that. I don't know if you could use the Defender ABS unit or if you'd need one from a Chevy truck. It depends if the CAN bus signals are compatible.

The Defender Wabco D ECU appears to be identical to the one found on a 99+ P38 and also an early Freelander which are more common, but I don't know how difficult it would be to program for the other vehicle. You might need a chip reader attached directly to the EEPROM. The pinout listed on the Blackbox Solutions website is wrong for the Defender. It appears they copy and pasted the pinout for the Freelander version, which is slightly different. So if you need to wire it go by Land Rover's diagrams only. Two of the connectors are the same on the Disco 2 Wabco ECU. The 9 way yellow and the 15 way purple. Here are the TE/AMP part numbers.

The Disco 2 modulator is also the same as the Defender modulator, but when it is wired for a Defender the brake pipes need to be plumbed for the Defender modulator, not what is listed on the Disco 2 modulator. It appears the main connector on the modulator is an AMP Econoseal and the single pin pump connector is a Sumitomo from Japan, but I haven't tracked down the part numbers yet. So just clip the connector pigtails off a Disco 2 at the junkyard if you don't have a Defender ABS loom.

Also, in the October issue of LRO there's a Q & A tech article about installing a new Defender ABS ECU with part # SRD000110. They state it needs coding of the VIN. I don't know what purpose that serves and I don't know what programming software you use for that. Maybe JLR SDD would do it.
Last edited: Sep 20, 2021

Actually it looks like the GEMS ECU doesn't output a PWM throttle signal and the only ABS connection is for the rough road signal. So for the 14CUX, GEMS V8, pre-Td5 diesels, and other older engines it appears you can install the older Wabco ABS without traction control found on the Disco 1 & RRC. The Td5 era ABS installed on the 300Tdi Defender in the LRO article must have had non-functioning traction control. So the minimum for traction control is the Bosch V8, M52, or Td5.
C

93 to 95 range had rear only traction control
You must log in or register to reply here.

Where is the oil from