Of course, my primary interest is keeping the smoke in.

The first concerns the rear wiper. I've puled the switch panel a couple of times to install the heated seat switches. After the last in/out, I noticed the wiper no longer does its thing when I hit the switch.

The washer part of the switch does work. It's just that the wiper doesn't move when I turn it on.

Checking power to the switch, I noticed a related problem. There's about a one volt drop between the battery and power heading to all of the "ignition on" feeds (radio, cigar lighter, etc.). My first thought is "resistance". My second thought is where things go a bit sideways. Perhaps sideways isn't the right way to describe it. More like "here is what it normally is on other cars I've played with... it must be the same here, right? Maybe not right. I'd better ask.

On other cars I've played with (911, XJS), such a drop is normally a symptom of a bad ignition switch. Over time, all the electric loads through the switch "wear" (normally, a build up of tarnish, arcing, other nastiness) simply adds resistance to the line, and because V=I*R, as I stays the same and R goes up, V goes down. This is usually fixed by installing a new switch. Some cars have an ignition switch in two parts: The "key" part which is purely mechanical, and the "electric" part which is where the electricery makes it's connections. On these you must replace only the electric part, which saves the need to re-key or at least the need to match the switch to the key you have. So this leads to two questions:

Does this sound like an ignition switch issue, or should I look for resistance elsewhere?

If it is a switch issues, recommended part number?

Thanks in advance! I am by no means an electrical genius, but I'd like to figure this out. My next project involves relays for the headlights and foglights, but I'd like to get this figured out before I put the big bulbs in!

The rear motor does gum up and it could be related to that. I would start by taking a voltage reading at the motor with the switch on and see if you see anything. Then it is a matter of back tracking from there.

For the rear wiper, I've had that apart once, cleaned, fresh grease. Turns out the problem that time was the spare was too close to the wiper and it was stopping the movement. I'll check it again, but the difference this time is it was working, I took things apart to connect the (new) heated seat switches, and then it stopped working. I thought I might have connected it wrong, or it could be the switch.

Will check the ignition. The car also has an alarm system installed by a PO, and I wonder how much of a vampire that system is. Would love to pull that whole mess out.

I just did that myself. Returned the stock wiring to stock and ripped out all previous attempts at burning the truck down…. Rewired all accessories through Aux fuse/relay panel. Electrical issues suck. 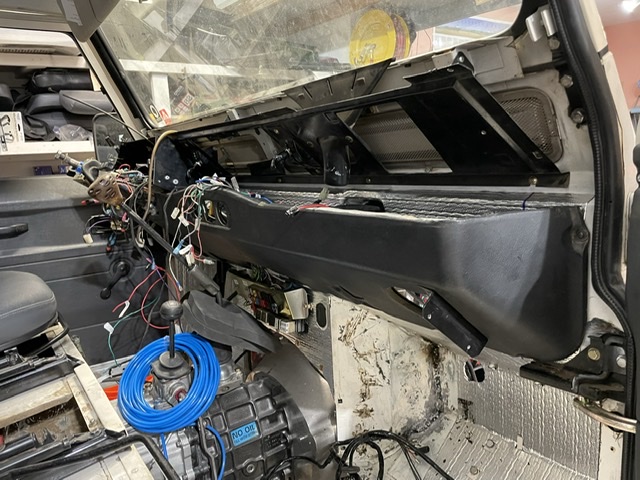 could easily be something unplugged. Also, I had one bullet that, when removing, the wire stretched and broke but the insulation remained Perfect— that was hard to find/trouble shoot. The reason for the advice is that it is a methodical treatment to finding the issue. start with symptom (motor not working), start from there…. May be switch, may be power…but that’ll be discovered quick and easy without backtracking.

Thanks. If there were "free spots" in the stock fuse/relay panel, I would use them. Mine is full, so I've added a separate bus, and am trying to wire to ABYC specs. I'm using all Marine grade wire, BlueSea accessories, etc. It may not be 100% stock, but I am making every attempt to not create fire hazards. I am trying NOT to wire anything through the ignition switch if that can be prevented.

The one "gripe" I have is new things all seem to include inline fuses. The heated windscreen had such a fuse, the heated seats have such a fuse, etc.

I'll start over on the wiper switch. I really think either I connected it wrong (possible), or the switch is just on it's last legs. As I said, it was working when I disconnected it to drill holes in the fascia for the heated seat switches, I'm just not sure how to test it.

I just replaced my switch with the Carling switch from Mud UK. https://www.mudstuff.co.uk/search?type=product&q=NOT+tag:__gift+AND+rear+wash*

They sell the covers and switch separately. The difference between US and UK style is that the bottom of the switch, when pressed, is off for the US and on for the UK.

So basically, check the green--make sure it is hot with IGN on. Turn on switch and make sure that Red/Green has voltage.