1997 NAS90 GEMS 4.0 Auto. Having driven in a torrential downpour for 4.5hrs a few weeks ago, the next day my engine started hard and ran very rough with an erratic idle. Another day later, it turned over strong (fresh battery) but now won’t start. Initially I suspected it was from the soaking drive that maybe affected an engine sensor (IACV, throttle position sensor, stepper motor, VSS) to cause the rough erratic idle.

When the truck was starting, it would immediately idle erratically climbing to 1500-2000rpm for say 10-15 seconds, then back down to 1K. If I tapped the pedal, it’d continue to climb and stay at around 1700 then ultimately subside. When in gear, RPMs stayed up as I backed out of my driveway, down my street and back (with foot on brake). During this initial running issue, I could still hear the pump cycle on for a few seconds as usual just before starting. That night, I noticed the tank was getting low on fuel so I refilled 3 gallons of gas that I treated and called it a night. The next day when starting, I didn’t hear the pump cycle on. The engine continually turns over strong but will not start now.

Side note issue: My fuel gauge had been waving in the wind with the slosh of the tank since I replaced my rebuilt speedo last month. I think I located the ground from the fuel pump and fuel sender unit connecting back to the LT230 and it’s secure to the box. This ground location to the gearbox seems to confirm with the wiring diagram. I also used an endoscope to follow the harness from atop the tank connector (pic3) and into the frame and don’t see any chafing/crimps from what I can tell. There are no grounds behind the rear speakers as in other trucks so not sure if I should be looking for another.

What I’ve done so far: All fuses under hood and in cab seem to check out for continuity and voltage (if I’m checking properly). I’ve located the relay module (pic1) that houses both the fuel pump relay and main relay but have not figured out how to test the pins just yet. I understand the fuel pump relay is fed from the ignition relay & controlled by the ECM so I pulled all the connectors to the ECM (pic2) and sprayed them with electrical cleaner. I can still hear the delayed click as normal here soon after the key is turned to off position so I think that’s working and will move on from that for now. I also reset the inertia switch in the engine bay. Fuel filter is 4yrs old.

QUESTION: Given this info does anything stand out for the best troubleshoot approach or testing methods to take before I have to drop the tank to check power at the pump (which I really don’t want to do just yet). I still need to consider the ECU immobilization under the dash as that could trigger off the starting and fuel circuits from what I’ve read but again, not sure how to test.

I’m trying to do my best with my basic electrical knowledge but after researching the various 97nas starting problems, I’m falling short.

Thanks for any input/direction or ideas. -Kev

Callsign: delete
Pretty easy to trouble shoot. If the power to pump wire off of the fuel pump relay has power after key is switched on, its the pump or the electrical connector just before pump.

Today we checked for power at the fuel pump relay and at the inertia switch and indeed they both have power. Inertia switch also checked out for continuity so it looks like I'm dropping the tank.

At least the truck is in warm storage for the season at local auto mechanics. I'm hoping the erratic idle and wavering fuel gauge just before it died was the result of a failing pump/sender unit/connection. Also, I read where one the connector pins at the pump would show signs of being burnt on some trucks.

I have the shop manual but any tricks that would help in dropping the tank are welcome. Thanks again for the input!

IIRC the problem I had was with the bolts toward the rear of the truck. They go through some tapped through holes, and the threads are exposed on the other side (but not easily visible or accessible). The threads got some gritty dirt on them, and when I tried to remove them, the grit must have jammed in between the threads of the bolt and the tapped hole, effectively wedging it in place. Applied more force to free it and broke the bolt. So I'd recommend getting in there with compressed air or something to ensure the threads are clean before attempting to unscrew the bolts.

Accept you will brake bolts, design is terrible. I’d have new bolts ready and I’d be prepared to grind off the captive nuts and use normal nuts or weld on nuts too. The fuel lines are also a pain, but in a pinch you can cut and shunt with clamps if they break (ask JimC how I made the ones on his truck Ron good).

Staff member
yep, you’re gonna break bolts. just be prepared to drill out broken ones and tap for the next larger size. I think they‘re only M8, so M10 would be the next.

Thanks for that guys but I failed to mention it was a rolling chassis 4 or 5yrs ago so I hope the bolts are not an issue..never know. I think the pump was new too which makes this a bit more perplexing for me.

Sure wish I could test for a short on that white/green leading from inertia switch to the pump without dropping the tank..Im pretty sure the ground is ok back to the T-box.

Staff member
When I saw the pic I wondered why you were dropping the tank! Then I realized you must have installed the body...

ya these pics were from 4 or 5 yrs ago..I know confirming power to the inertia switch and continuity tells me to drop the tank but the crazy erratic idle and wavering fuel gauge just before she was a no-start twists on my mind..
Last edited: Nov 17, 2020

There is a connector in the wheel well you can test without dropping the tank.

for a 97nas? I dont see that but will look again and also on the schematic. Thanks.

Looks like the 110 Nas has a 'fuel level unit' accessable from the side. The 90 Nas has the pump and sender as one unit atop with the connector unfortunately.

There is a short run of wire with a connector in the passenger side rear wheel well area. At least there is on 94 D90.

This is a picture of the connection in the rear passenger side wheel well. Mine had a broken wire at the connector that took me a week to finally diagnose. It would intermittently make proper connection. 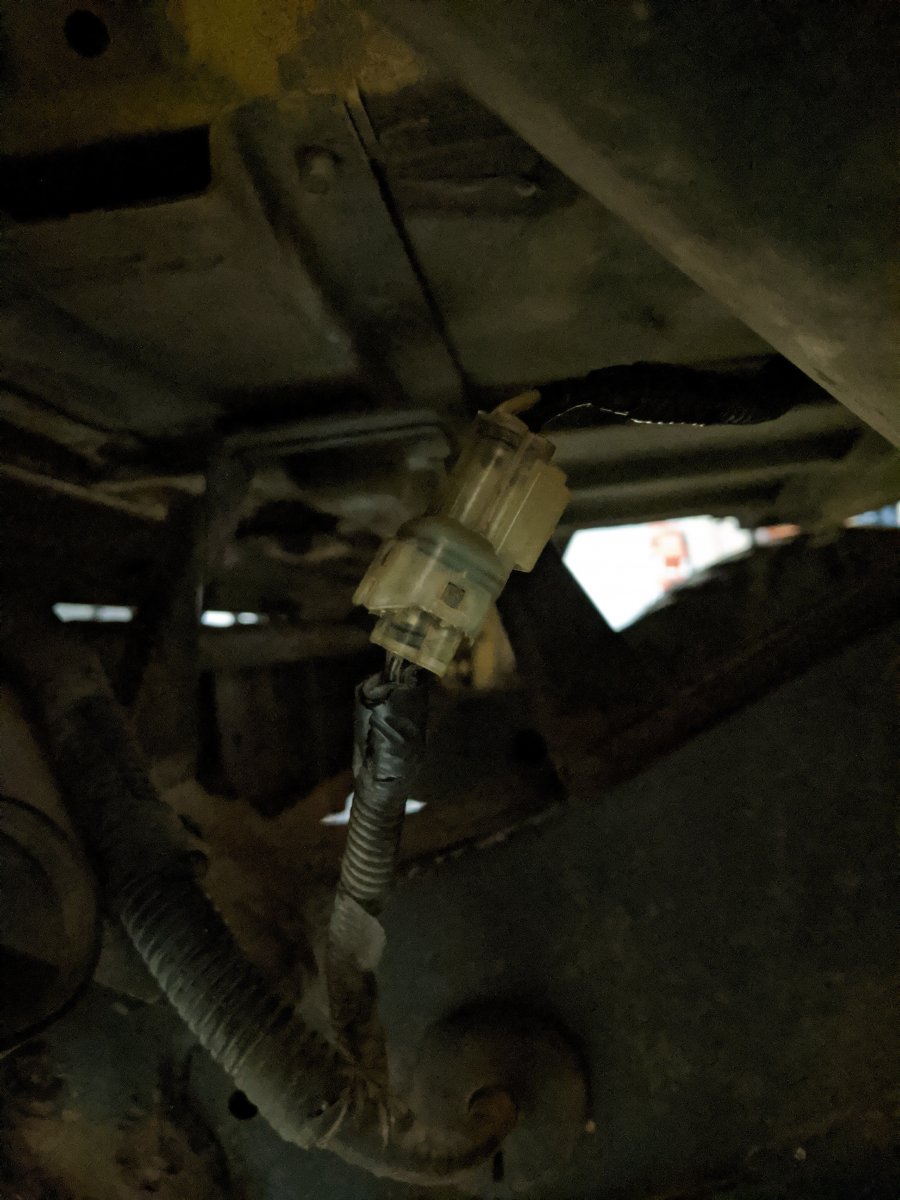 thanks for the pic... bizzarro,, I have nothing close to that coming outta the loom in my 97.. it's a full wrap from the tank, outta that side (as shown) and into the frame (followed via endoscope) then out of frame with the negative going to the T-box and the remaining wires traveling atop the bell housing and on.

I just don't see it on the 97nas schematic nor on my loom but either way, I'll be installing a test connector like that or will be cutting a hole in the tub for future access believe me..

Here's the schematic for the 97's. C377/C391 are in the engine compartment; from there it goes to the fuel pump. The C813 ground point is next to the gearbox. It's been years since I dropped the tank on my 97 NAS but I don't recall another connector in that area.

I had a very weird problem. Every once in a while the fuel pump fuse would blow. If I replaced the fuse right away, the new one would immediately blow. However, if I waited awhile (say an hour or so) I could put a new fuse in and it would be fine. It would be OK for a week, or a few days, and then it would happen again. I finally ended up dropping the tank, the problem was obvious. The dealer had replaced the fuel pump some time beforehand. They had to put a new connector on the harness as well, since the connector C113 had melted. They did this with a pigtail. But when they put the tank back in place, they pinched the pigtail splice between the tank and the chassis. It eventually wore through, and shorted against the chassis. If I replaced the fuse right away it would just blow again. But if I waited, enough corrosion would build up to act as an insulator, until sometime later it wore through again.

I remember one of the bolts broke off inside the hole so there was nothing to grab on to. I tried using an "EZ Out" and that broke off, too. Now I had a piece of hardened steel that could not be drilled out. So I had to spend time on my back using a carbide bit in a Dremel to grind that out. Then I had a decent hole in the bolt remnant, and used a left-handed drill bit to drill enough of it out that the bolt finally started to turn. Fortunately, I didn't mess up the threads in the chassis so much that they couldn't be used. 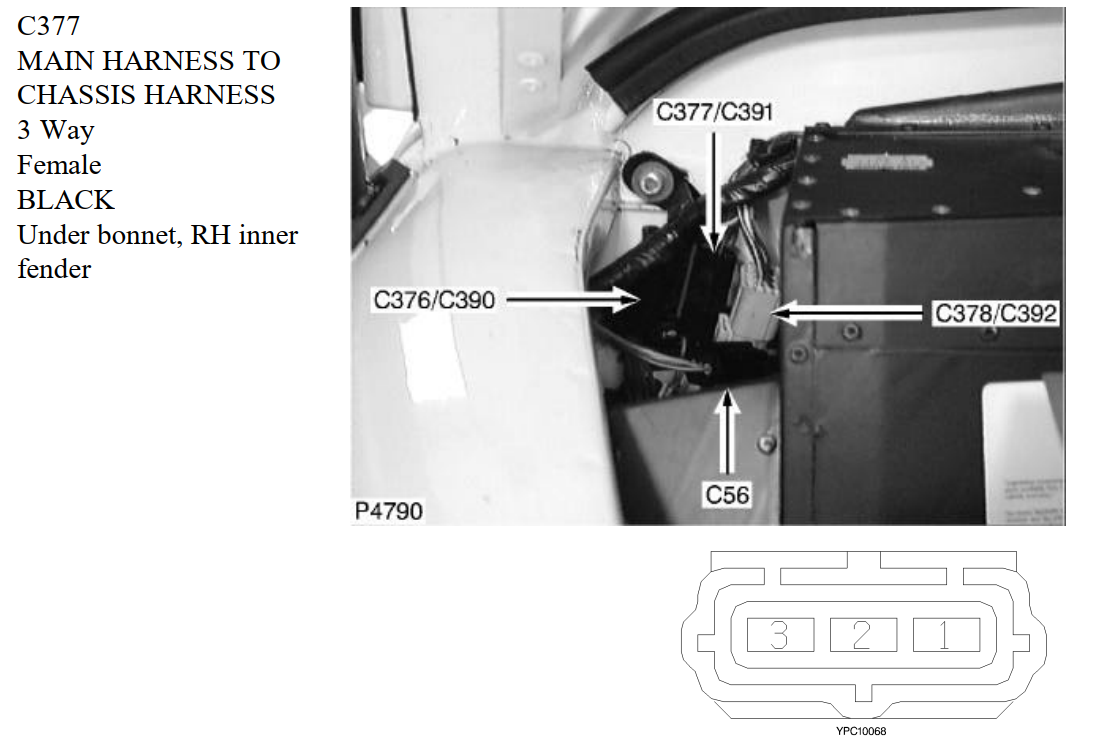 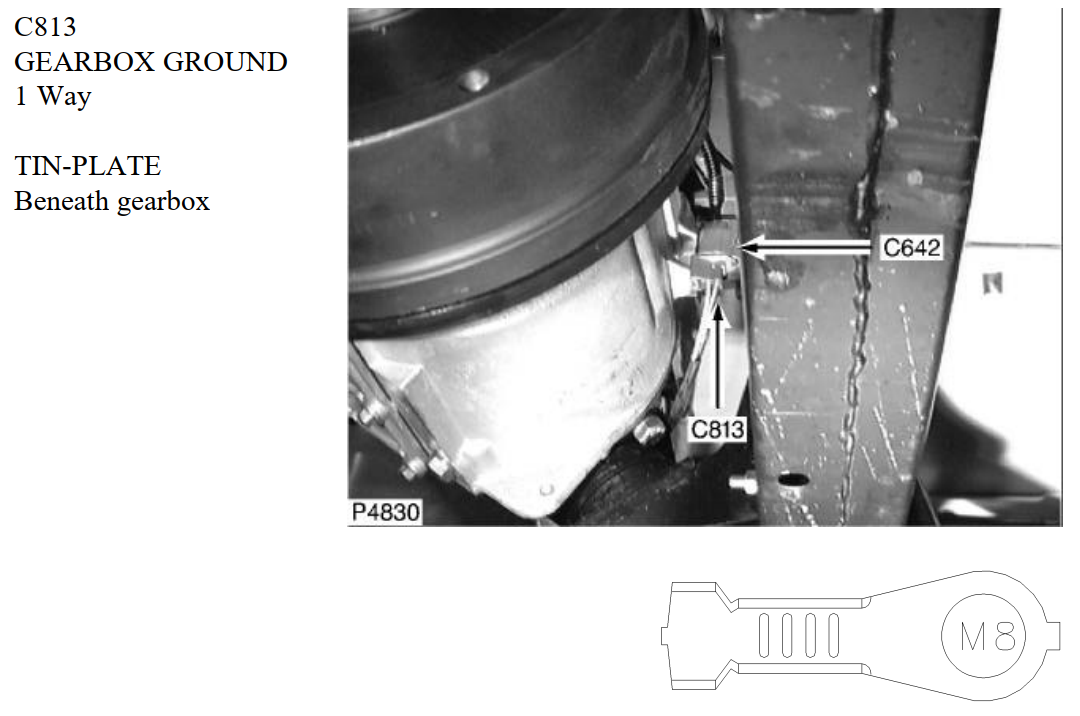 uc4me said:
Sure wish I could test for a short on that white/green leading from inertia switch to the pump without dropping the tank..Im pretty sure the ground is ok back to the T-box.
Click to expand...

Should be a white/purple. Green/black is the sending unit.

Terrapintige said:
This is a picture of the connection in the rear passenger side wheel well. Mine had a broken wire at the connector that took me a week to finally diagnose. It would intermittently make proper connection.
View attachment 15981
Click to expand...

I should have clarified, this picture is from a NAS 94 truck. I believe the 95's are the same. The wiring on a 97 is probably different with all the other electrical and ignition changes between those years.

Callsign: delete
No way to make job easier other than siphoning all the gas out first- dealing with even a half full tank sucks.

Best practices-use copper antiseize on the tank skid bolts on re-assembly to prevent the inevitable corrosion from tire spray.
We also wrap the connector plug connection with self adhering silicone tape. https://www.amazon.com/Self-Fusing-...t=&hvlocphy=9008695&hvtargid=pla-855747702407

Fwiw in my experience pumps die from sitting. A daily driven fuel pump will last longer than one that sits.
Last edited: Nov 20, 2020
You must log in or register to reply here.