@bboretsky There is not a conversion kit for the Chevy 250 for an Automatic Transmission.

I recently saw @Adog and his Chevy 250, and he did nothing but rave about how awesome it was. It sounded so good! I am pretty sure a Cummins R2.8 is coming this way.
B

You are correct. I have the LT85 5 speed with the LS230q xfer case with the 1.22 ratio. I wanted to keep the snowflake theft prevention petal.

Just fix what’s broken. No need to rebuild. A tear down will take forever (don’t ask me about it). Rolling restoration is the way to go if you actually want to rebuild. So do the drivetrain swap first if you must. If you make it through that, then go ahead and do the bulkhead. Then do the frame. Or something like that. If you make it through the drivetrain swap, fix some little stuff as you go. Maybe spend a day or two doing T-pieces for example. Brake overhaul one weekend. I’d probably start with the easier projects like brakes or t-pieces before going to a big one like a drivetrain. Just to see if it’s something you can and want to do (plus turning wrenches has a learning curve to it). Once you take it all apart it becomes hard to get it back together especially as time goes by, plans change, you forget how stuff goes together, you misplace parts etc.

My new rule is no more than 4 weekends of work on any project vehicle I get and they never come fully apart. New LWB is probably going to be double that, but that’s normal to find stuff as you go.

The sad part is I rebuilt my SII 88” in weeks and I had about as much experience with auto repairs as you did when I did that. And it was early internet days so no YouTube videos, not even really pics on forums. Is it perfect. Hell no. But it went from a storage unit full of parts to running and driving in under a month. I need to go back with what I know now to having the time and energy when I was that young (I worked basically every waking hour in a freezing garage).

Have you built one of these stands? I've been wanting to learn how to weld for years, and this looks like it is a good little project...and I do have a LT230 that needs to be rebuilt... 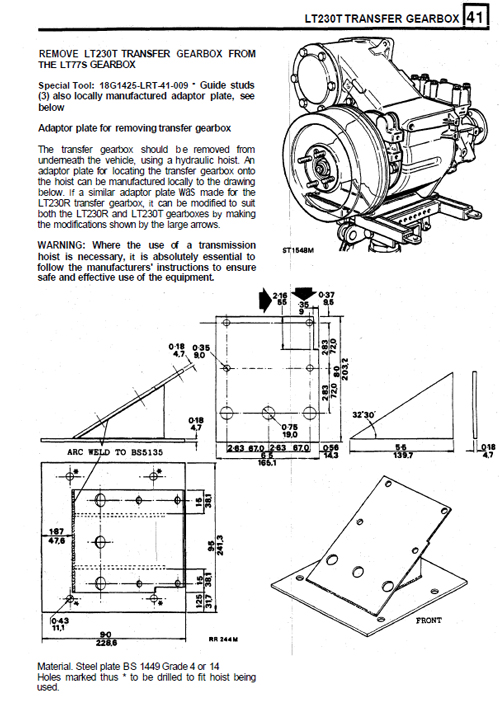 theShaytoon said:
Have you built one of these stands? I've been wanting to learn how to weld for years, and this looks like it is a good little project...and I do have a LT230 that needs to be rebuilt...

Reach out to Royal Overland in Texas, I think they'll sell you one

I believe you misunderstood me. If I just buy the part I need we would be defeating my actual intent: justifying the need for a welder, a welding helmet, welding gloves, welding cap, welding shirt, welding jacket, welding rods, a grinder thingy that can cut metal, the little magnet things that hold metal, clamps and more clamps...not to mention a metal break, a plasma table, etc. etc. etc.

ALSO the manual clearly says the adaptor plate needs to be "locally manufactured"...and we have to follow the manual...these are the RULES! And RO is in TX, and that is no longer local to me!
A

I believe you misunderstood me.

"...and we have to follow the manual...these are the RULES! And RO is in TX, and that is no longer local to me!
Click to expand...

This is the way

Well in that case, you can still reach out to them as I believe they'll also sell you the plates that you can weld together yourself

javelinadave said:
I would definitely keep the dual speedo setup.
Click to expand...

That looks like a tachograph, similar to the ELD or Electronic Log that truckers have to maintain to satisfy DOT Regulations. 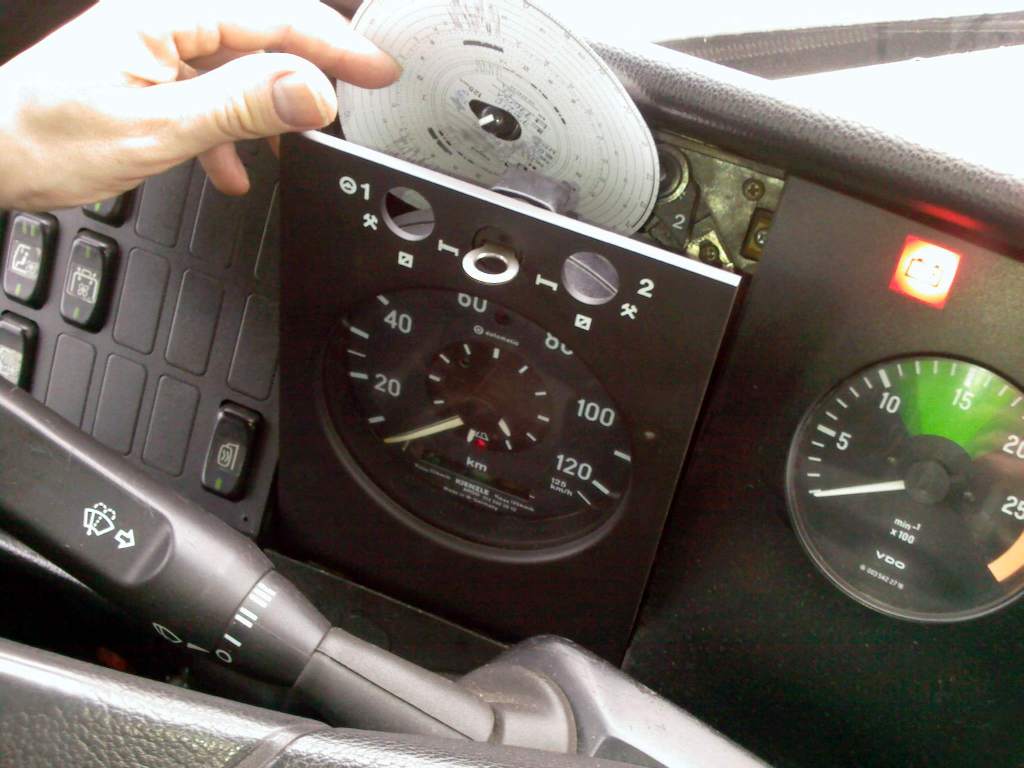 rocky said:
That looks like a tachograph, similar to the ELD or Electronic Log that truckers have to maintain to satisfy DOT Regulations.

That is exactly what it is, if you pop it open, there is the piece of cardboard with the markings.

While changing the diff oil, I noticed that the front diff had taken a couple of big hits. And I mean BIG HITS…not only was it dented, someone had taken a welder to her to fix up a crack. It is not leaking, so I am assuming they did a reasonable job, but I set out to look for a new housing.

Have you seen how much a new one costs? Well…on to plan B; get one out of the Disco One that the transfer case came out from at the local pick and pull yard. Unfortunately, that one was in real BAD shape too.

NEWBIE (<-ME) HINT: Row52.com Sign up and you can setup alerts to let you know a local yard has new inventory you might be interested in.

A 98 Disco had just arrived, and I went to check it out. I needed the shifter for the new automatic going into the D110, and while there I noticed the front axle was in great shape cosmetically. 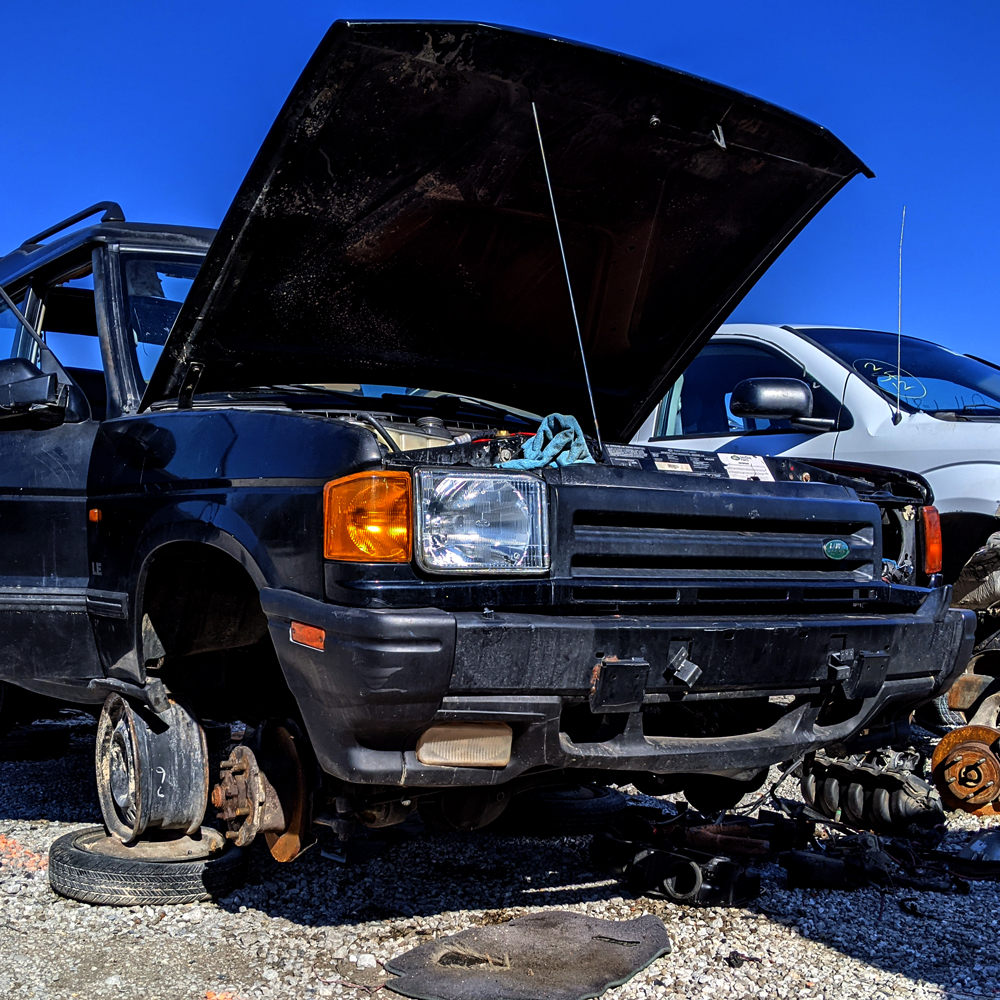 The first problem: The car was sitting on the radius arms instead of the frame.
The second problem: I had no idea what the hell I was doing.
Third problem: Snow and Rain for the next 5 days.

Problem One: Asked the yard manager if they could reposition the Disco. He said no problem and would have it done in the morning.
Problem Two: Watched a ton of videos on the old YT and studied diagrams. Also begged my neighbor to come and help.
Problem Three: Had to wait for the weather to clear and pray some other person didn’t have the need for the axle nor the fortitude for the cold.

Day One: I figured the best way to begin was to start with unbolting the things that I didn’t need. So stripped the steering, pan-hard bar, and the anti-roll bar off. Next, loosened the radius arms nuts and took off the brake calipers. One caliper was missing a nut, and apparently the last guy to work on the calipers didn’t have a 13mm 12point, so they welded a 14mm bolt head to the 13mm 12 point. I am not kidding. I spent the rest of day one trying to figure out how to SAFELY take that axle out.

You see, they will not allow me to bring a jack to the yard. And the staff did a pretty good job of removing all the jacks from ALL the vehicles that were there. So now the axle is in its full extended state, with no way for me to jack it up to “unbind” everything. Went home, deflated and started on the Gin and Tonics.

Day Two: The yard doesn’t care if I bring in ratchet straps…If I can’t jack up the axle, maybe I can hoist it up. I have a plan at least. Jo, the yard manager, stopped me on my way in to let me know there was some guy picking parts off the Disco, and to inquire about my plan. He very kindly offered the use of one of the engine hoists once he heard the plan. I just needed to promise not to lift the actual car with it. This is a problem at the yard, who would have thunk it.

The guy under the Disco was a buddy that needed some parts for a Disco build he was working on. Luckily for me he was there at the right time. And while the ratchet straps idea didn’t work, we did have the engine hoist. We raised one side of the axle, beat the radius arm out, and then did the same thing for the other side. So for $220 and 6 hours of rolling around in wet gravel, I have a new used front axle. While I only needed the housing, maybe some of the other parts will come in handy. 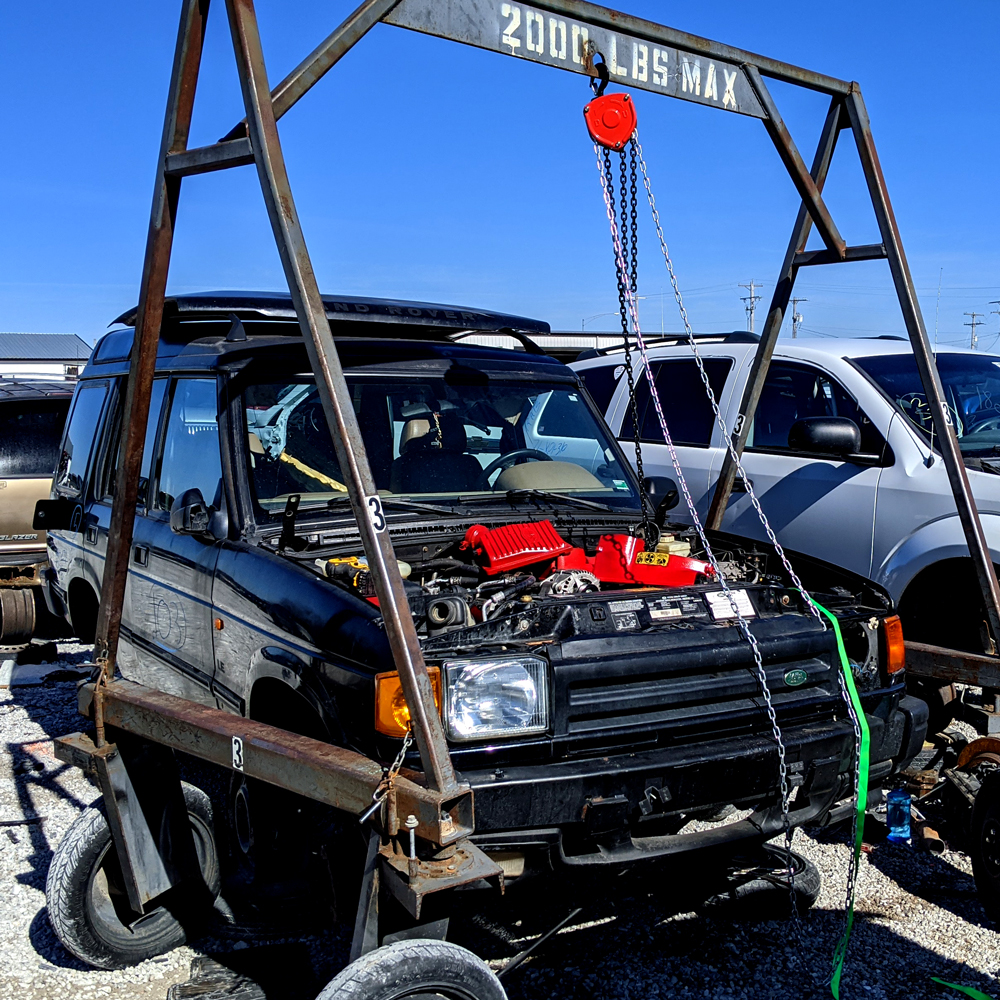 Personal observation: They are shady AF! 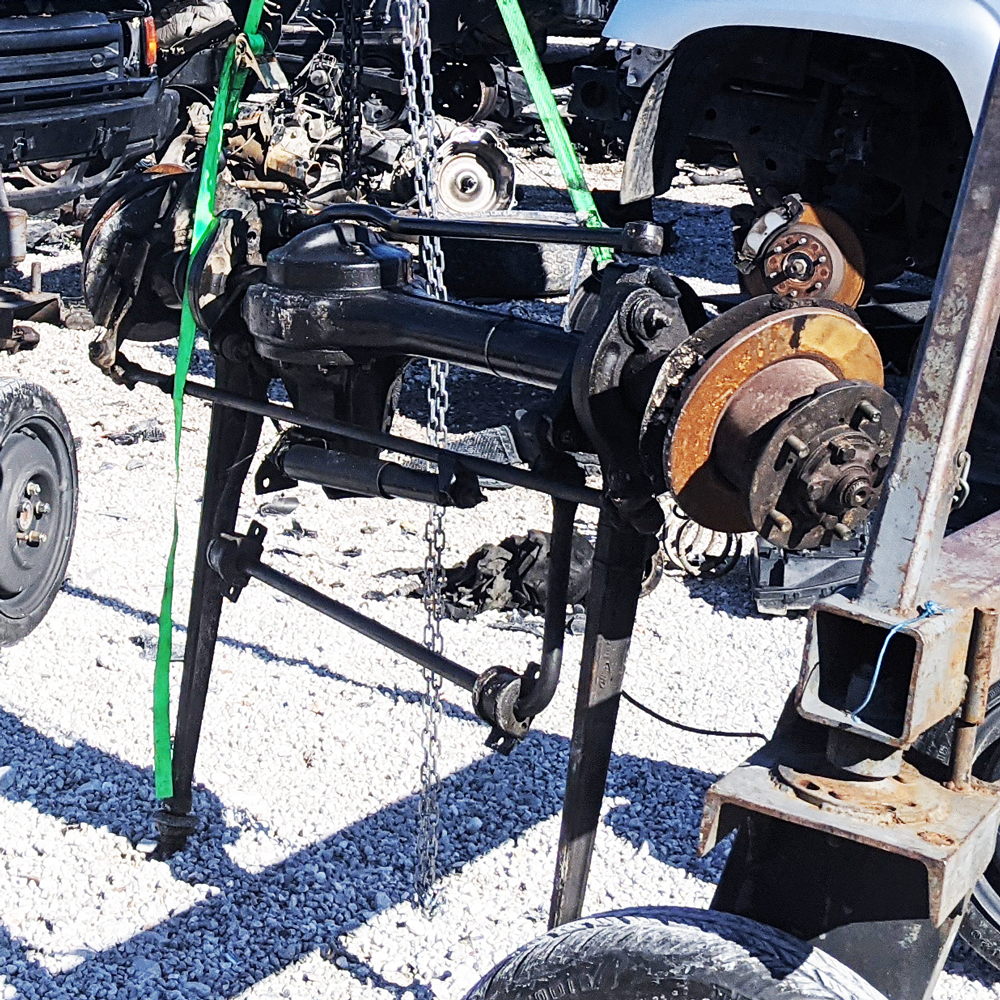 With all the delays that life throws at you in 2020; we drove the #OrangeCrush all through Winter and Spring. We took it camping, on trails, to the ice cream parlor, and Rigs and Coffee. Parts were coming in right and left, but I was having a delay receiving the title paperwork. I had it in my mind, that until the paperwork was completed, I would not tear into it.

Unfortunately, the Cummins R2.8s where also in a delay pattern; no harm, no foul. I had sent in the importation paperwork to the state in October 2020, and placed the order for the Cummins at the same time. In late December, the state wanted a completely different type of inspection conducted by the Highway Patrol. Fifty five bucks later, and a drive to the troop headquarters, all the paperwork looked like it was DONE. Not tearing into it really paid off, as I had to drive it there…Now to wait 6-8 more weeks for a title.

In late March, we get the title but still no engine. The window to start the Resto-Mod closed, as I had to leave town for an extended time. So skip to end of MAY, engine is ready to ship. Transmission is in a crate in the garage. We go to drive it in the shop-garage, and it is too tall. I already knew that, and was prepared to deflate the tires to “make” it fit. Then the realization hit that there is not enough room to jack up the Defender without hitting the steel beam holding up the living room floor.

Plan B - Remove the roof.
Easy enough, a dozen or two bolts later and I was ready to pull it off. I am sure there are people out there that have done this on their own, but I am not one. I needed a couple friends to help lift the roof , so I threw a Memorial day BBQ at the house. Friends came, we ate, we drank, we raced the GROM against a HEMI golf cart, and yes, we removed the roof of #OrangeCrush. 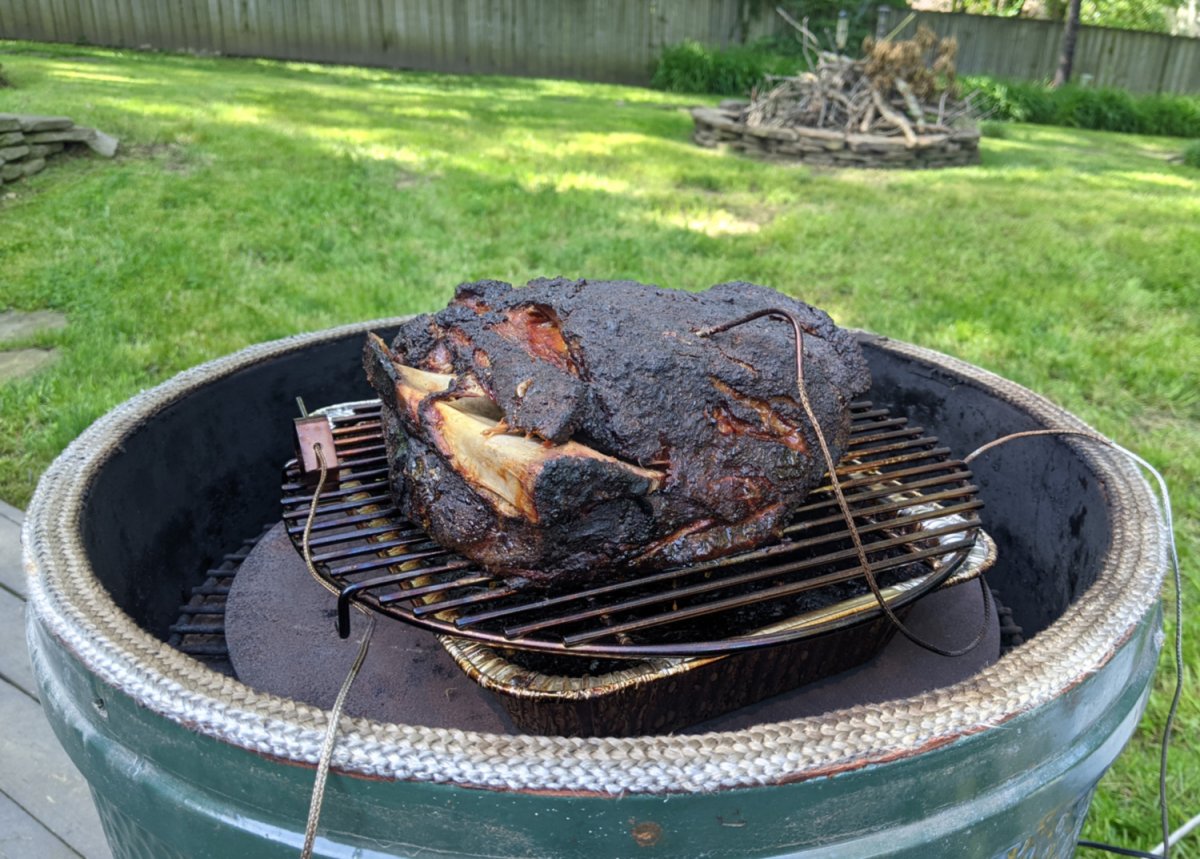 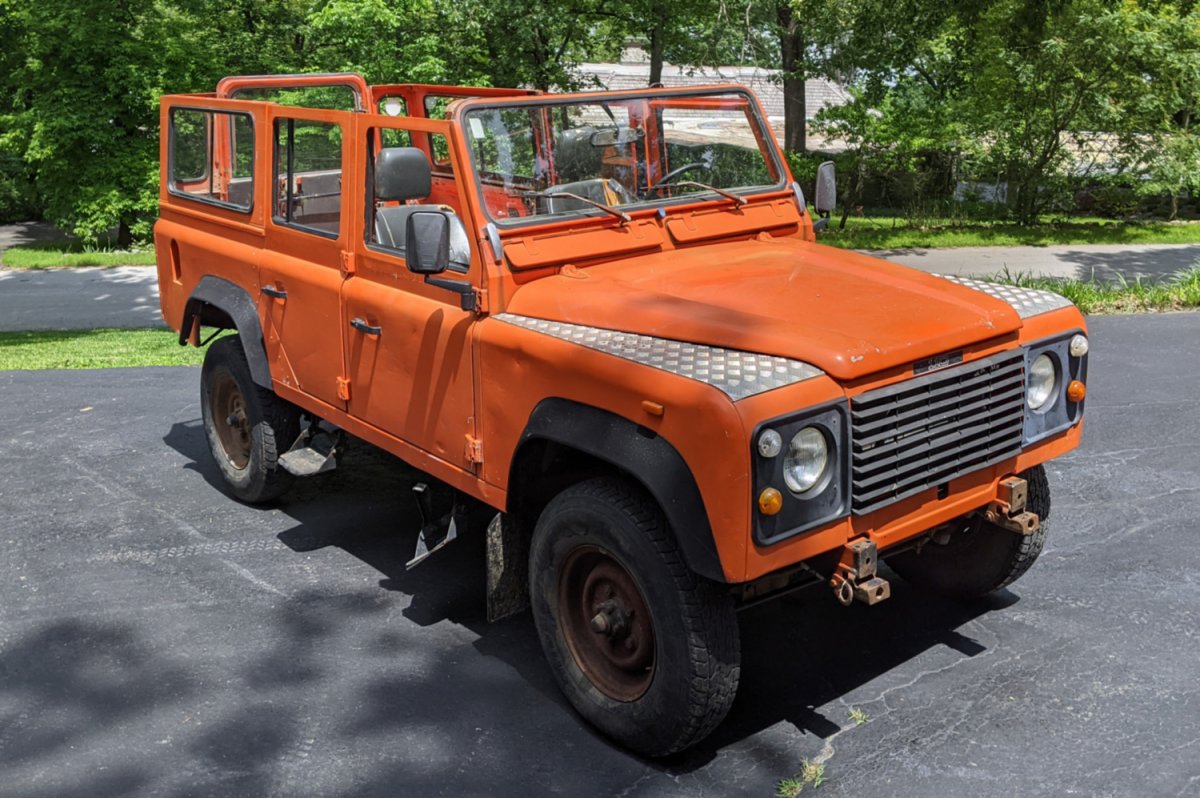 A sad dude knowing it will be a while before getting to take it out for a drive again. 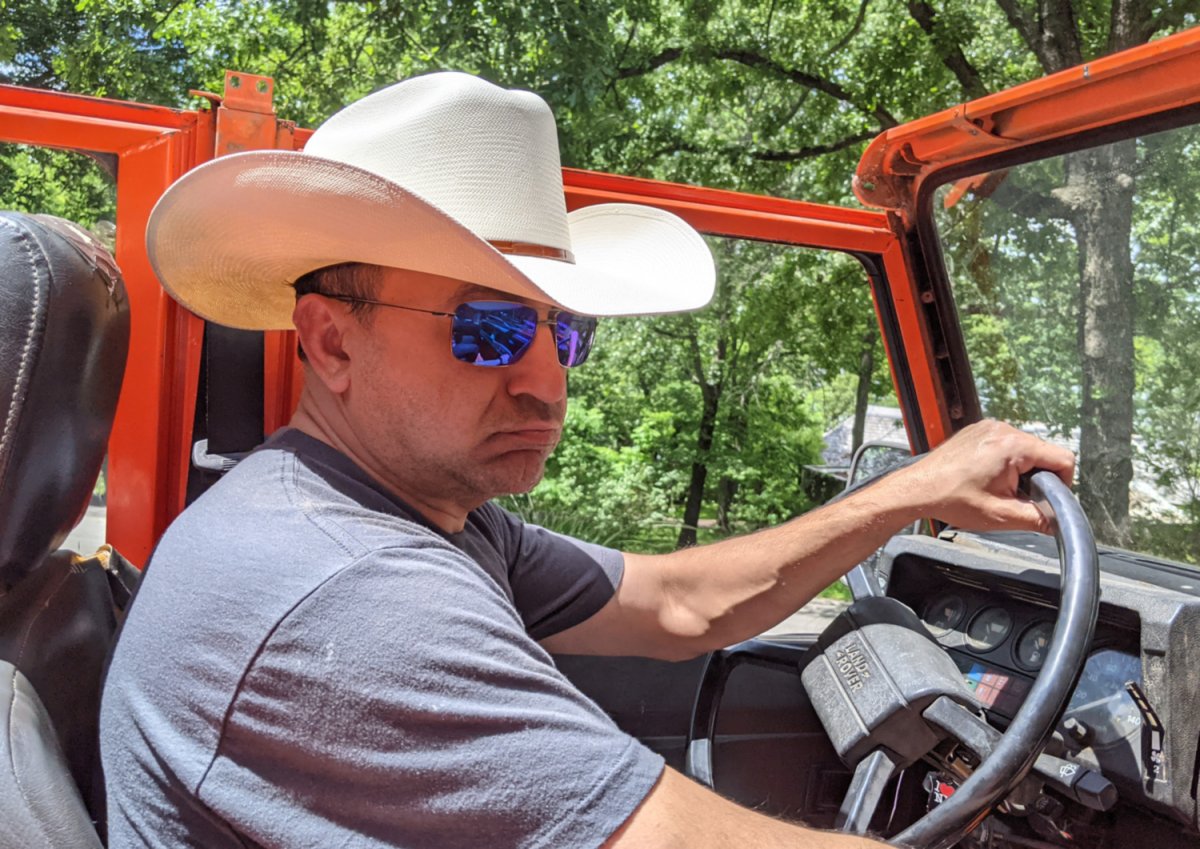 bummer, but you at least have plenty of time to scrub that interior and get some 303 on it.
You must log in or register to reply here.
Share:
Share Link
Top